Don’t Get Choked Up Over It! Can Insects Choke?

This brilliant gem came from a five year old. Kids ask the best questions, don’t they?

And here’s the thing. We have covered spitting and vomiting which insects definitley can do.

But insects can’t actually choke – and here’s why.

END_OF_DOCUMENT_TOKEN_TO_BE_REPLACED

Can you hatch eggs taken out of a female katydid?

Posted on September 19, 2017 by Polistes fuscatus

This is a pretty cool question:

I killed a large green grasshopper-like bug, only to find several reddish- brown rice-shaped things inside. Are they eggs? Can they still hatch?

I’m not sure what type of insect it was, but my best guess after an Internet search is… conehead/katydid.

Also, why might I find these insects in my home? Surely bright green bugs feed on vegetation? 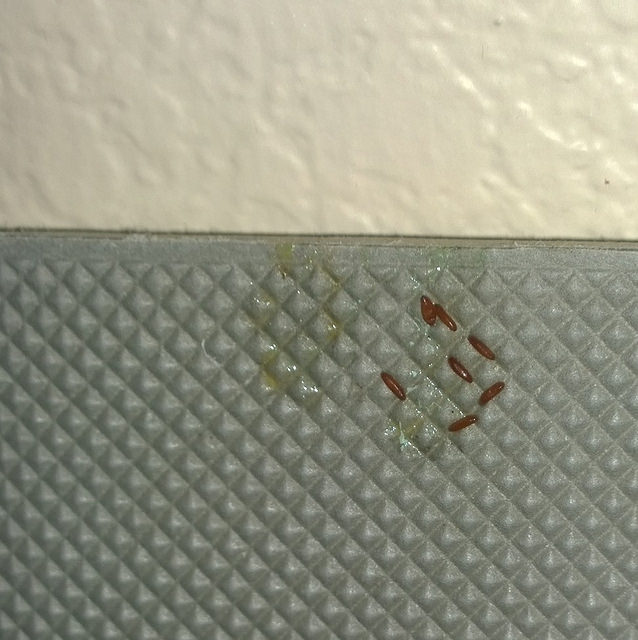 In this case, it sounds like a Katydid which got inside a house by accident. It’s common for bugs to get inside a house, and katydids just kind of keep looking for a way to get out when this happens. Here, the katydid was smashed and some eggs popped out…which led to the above question.

If you crush a bug, and eggs come out, they’re not going to hatch. The eggs need to be activated before they can develop, and taking the eggs out of the female without them being laid bypasses that process.

…but how are the eggs activated?

What, exactly, has to happen while the eggs being laid for them to start to hatch?

END_OF_DOCUMENT_TOKEN_TO_BE_REPLACED

Help us out by taking a survey!

Posted on September 8, 2017 by Polistes fuscatus

We’ve written about scientific conferences before, and we’re happy to announce that all of our writers will be together at ESA 2017 in Denver, Colorado!

As always, we’ll write a post summarizing our experience…but our talk is a bit different this year. We’d like some information on our audience for the talk.

Here’s a link to the survey, and we’ll post a short bit of information for further context below the fold.

END_OF_DOCUMENT_TOKEN_TO_BE_REPLACED

Goop offers bug repellent at 6x what a comparable product would cost.

Posted on September 3, 2017 by Polistes fuscatus

Sitting on the deck swatting away flies or mosquitos is a situation that can be dealt with non-toxically. https://t.co/ff22sYfFIr

I’m familiar with GOOP and had a pretty good idea of what I was in for when I clicked the link…and I was actually happy to see that they were selling something that looked like it could be useful.

…and then I looked at the price and freaked out a bit.

You should not be paying $30 for a bottle of bug spray.

END_OF_DOCUMENT_TOKEN_TO_BE_REPLACED

Are there invasive insects from North America? The political consequences of our invasive species.

This question about invasive species caught my eye, mostly because I’m not sure I can give a complete response.

Reading abt Asian citrus psyllid. Are there many N. Amer. insects considered pests/invasive on other continents?

A lot of the insects I deal with are agricultural pests, and most of our agricultural pests have come from other parts of the world because of shipping activities. A lot of invasive species, however, have also come from America as well. Fall Armyworm, native to North and South America, has started cutting large and destructive swaths across Africa after it was introduced. Western Corn Rootworm, a billion-dollar pest, has been introduced to Europe and threatens agricultural supplies there as well.

Unfortunately, I’m just not familiar enough with this topic to give a super complete list…but I do want to talk about this topic because I want to highlight not only the economic ramifications but also the political ramifications that introduced species have. Instead of giving a complete list of North American introduced species, I’m going to focus on the one I believe to be the most important…not only economically but politically.

The pest species is the Colorado Potato Beetle, and it’s probably the best documented invasive species from North America. It’s expanded it’s population from Mexico, into North America, and has spread across the world over the past 150 years. It’s extremely hard to kill, and because of this, it’s played a prominent role in every major world conflict since WWI.

END_OF_DOCUMENT_TOKEN_TO_BE_REPLACED

What’s the Difference Between a Butterfly and a Moth

We’ve been having a lot of fun and games on our Facebook Page! Literally. Games. Like our new bug quiz series!

Which of the lettered insects is a butterfly?

Which do you think is the butterfly?
Scroll to the bottom to find out.
PC: Nancy Miorelli

So have a quick look a the Bug Quiz and watch the video below about what the difference between a butterfly and a moth is. (Hint: People have been arguing about it for the past 250 years) In the video I say that you can type “MOTH” to recieve the free PDF. That only works on the video inside facebook . If you just want to download the pdf from here – look no further!!

END_OF_DOCUMENT_TOKEN_TO_BE_REPLACED

Storytelling in Science: How do Stories Work?

Posted on August 5, 2017 by Polistes fuscatus

Throughout my SciComm career, I’ve told a lot of stories about science. I’ve been active in online science outreach for 10 years, and I’ve written hundreds of blog posts across about a dozen different websites.

However, I’ve never considered myself an expert in the topic. In school I had a lot of writing classes, but they always focused on the type of writing that was perceived to be beneficial to a career in science. Things like grant writing, and scientific paper writing were on the top of the list…but I never got any training in creative writing.

I feel like this is really important. I’m going to be writing a post about invasive species soon, and in this post, I’ll be telling the story of how this species spread across the world and what it means to people. These sorts of stories are really important to writing about science, and I’ve always wanted to improve my storytelling. I’ve been doing my own research, but I wanted to ask someone who knows a lot more about this then I do.

This desire to become a better writer convinced me to reach out to a professional filmmaker, Michael Tucker. Tucker runs a YouTube Channel called Lessons From the Screenplay. We had a short conversation about how scientists tell stories, and I wanted to take this as an opportunity to review what I learned.

You can watch the video above, or read my reflection, and I’ll also post some of the videos we mentioned specifically.

END_OF_DOCUMENT_TOKEN_TO_BE_REPLACED

Posted in Uncategorized | Leave a comment
Ask an Entomologist
Blog at WordPress.com.