Posted on July 5, 2018 by JoanieTheEntomologist

Hey ya’ll! We’ve been doing these neat live videos with entomologists from all different backgrounds. It’s been almost a year of doing so, but they are only posted to Facebook. From now on we’re going to provide the link to our BeLive videos here!

Riley is a PhD Candidate at Case Western Reserve University in Cleveland, Ohio. He currently works on feeding behavior and malaria infection in the Anopheles mosquitoes of Madagascar. He does this by conducting field work in Madagascar – living in remote villages with a small Malagasy team that treats malaria patients as they catch local mosquitoes.

You can also check out Riley’s WordPress here

Ladybugs as invasive species…what does the science say? 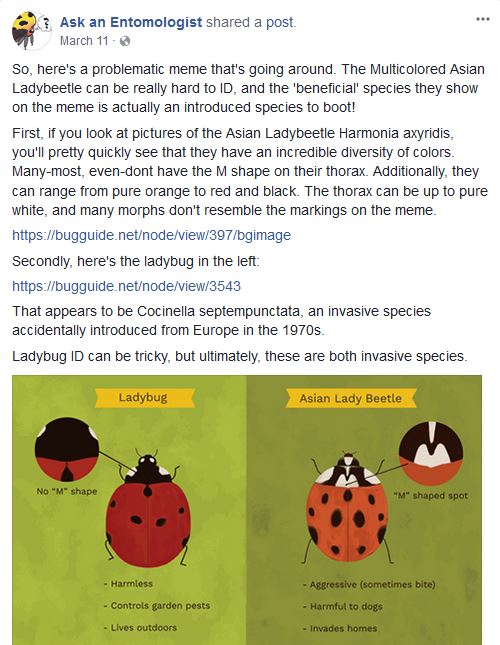 In the comments under the article, I may have gotten myself into a bit of trouble because I made some comments which implied some things which weren’t quite correct:

Everything here is factually correct. Ladybugs bought online don’t really help with pest control, unless they’re contained inside the garden with something like netting. Invasive ladybugs do carry parasites, whose roles in ladybug ecology are uncertain overall. They also do eat ladybug eggs and larvae, and it’s that last point which I’ve decided to explore a little bit further.

When I made these comments, the implication…and what I thought was true at the time, was that Asian ladybeetles were a major cause of ladybug species changes in North America. However, it seems that I wasn’t current in my research because these questions have begun to be answered by our colleagues.

So…this week, let’s explore ladybug declines in the US.

END_OF_DOCUMENT_TOKEN_TO_BE_REPLACED

A look at resistance management in biotechnology.

I work in industry, so it’s not often that I can talk about what I do. The reason for this is that I work in a group called discovery, which means that I look for new proteins which we can use against crop pests. The majority of what I find doesn’t work, which is kind of par for the course. However, when we find something that only works against certain insects, we slap it in a plant and then wait a decade for it to come on the market after a whole host of safety tests. In agricultural biotechnology, our goal is to find things that are specific. That is, we want to use stuff that only targets insects…and specific groups of insects at that.

Double-stranded RNA is perfect for that. Critters use dsRNA to do a whole lot of things, from fighting infections to turning specific genes on and off while they’re growing up. It’s purpose is to be very specific, and only act on certain genes. It’s the perfect tool for agriculture, because if we find the right gene sequence, we can make a pesticide that is species specific.

Beyond that we also need things that are durable; that are resistant to evolution so they’ll be on the market for awhile. Some animals are so well known for what they do, that we can associate them with a certain lifestyle. Fish live in the water, so they swim. Birds get around by flying, so they’re associated with flight. Well, insects evolve resistance to everything we’ve ever used to control them. So birds fly, fish swim, and insects evolve.

dsRNA was supposed to be a perfect tool. It was species specific, safe for use in food plants. Hypothetically it was supposed to be durable, as well. This is a pretty important pathway, because bugs need it to fight diseases and work their genes. The idea was that if insects became resistant to one gene, that gene could be swapped out with something else pretty easily.

Well…even seemingly obvious hypothesis need to be tested, because nature doesn’t always work like we think it should.

END_OF_DOCUMENT_TOKEN_TO_BE_REPLACED

Caught on camera: A wasp…party?

During the fall, we get a lot of questions about wasps…but not about wasps in nests.

Often, these are from people who work in construction or otherwise around heights. I know the sizing of the pictures below is a little awkward, but they’re sized this way to show the behavior.

I run a house framing crew and each fall i run into this same situation. We have a boom truck on site (crane), and when the boom is high in the air, wasps congregate all along the boom, but especially at the tip. They will swarm all around the boom, more so the higher it gets. As i lower the boom to ground level, the wasps dissipate rather quickly until they are completely gone within 10′ or so of the ground. If i then raise the boom again, the wasps return almost immediately.  They hang out wether the machine is running or not. Just wondering what is going on. Also, there is no nest in the boom. I work in the communication tower industry and every year around late summer to early fall we tower climbers experience a phenomenon. Wasps will swarm up towers. As you can imagine, this can be very disconcerting, however they aren’t aggressive at all while they’re doing this. In 20 years of climbing I’ve never been stung. It appears they are in the mood for love and mating.

There are a lot of misconceptions about this phenomenon though — everything from the wasps being attracted to the RF (radio frequency) to being attracted to the galvanizing of the steel itself. Would you explain what they’re doing up there and speak to the hazards of climbers sharing space with hundreds of wasps?

We’ve written about wasp nests before, in a question about why wasps tend to die headfirst in their nests. To begin this story, I’d like to quote the last part of that article.

These wasps are caught out in the cold-both figuratively and literally-after their society collapsed. After the annual collapse of their society, they died looking for food.

This sort of behavior is actually very common in social insects. Honeybees do the same thing. After winter, it’s very common to see dead bees headfirst in honeycomb. They died the same way…looking for food.

While these wasps didn’t make it, some of their sisters survived the winter by finding a warm place to sleep. They’ll start nests of their own next year, and the cycle will continue anew.

It’s sad, but that’s nature for you. It’s both beautiful and cruel…all at the same time.

At the end of every year, wasp societies collapse. The workers die, the queens hibernate, and new nests appear in the spring. It’s a simple story…but it’s not quite right. As always with insects, there’s more to the story.

There’s another layer of complication to how people tell the lifecycles of wasps, and the pictures above show a part of an interesting story that few folks know about.

Before they build their nests in the spring, the future queens gather for one last party.

END_OF_DOCUMENT_TOKEN_TO_BE_REPLACED

This meme – floating around FB. Fact? Fiction? Mix?
I’m starting to feel like we’re the Snopes of Entomology.

This has been floating around Facebook. So fact, or fiction?

Mostly False.  Like 98% False. And lots of misleading information.

END_OF_DOCUMENT_TOKEN_TO_BE_REPLACED

What is an Arachnid?

Posted on February 20, 2018 by JoanieTheEntomologist 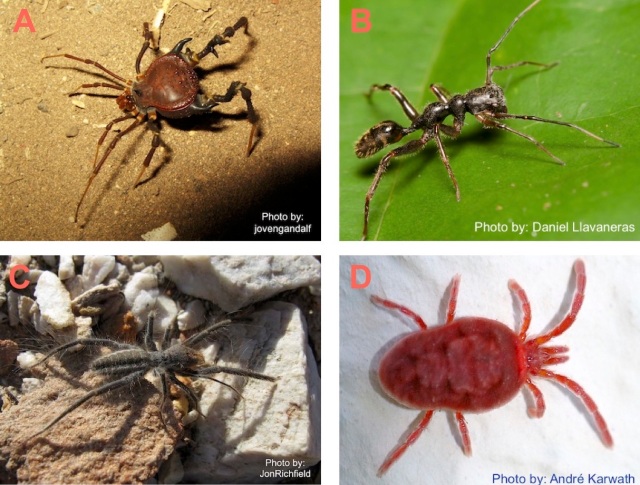 One of our most common identification requests are pictures of spiders and other arachnids. Nancy and I did a live video awhile back talking about arachnids. In the video we say that you can type the word “SPIDER” to receive a free PDF; however, that only works on Facebook. You can also download the PDF from here: Arachnid Bug Quiz Answers

What is an arachnid anyway? Like insects, arachnids are arthropods. Insects are a class of arthropods, and arachnids are also a class within Arthropoda. In biology we organize organisms based on their relationships (biological classification – think of Carl Linnaeus). A broad group is one that shares a lot of characters, while a more specific group shares unique character(s). Although insects and arachnids are related, they are different enough that they are placed in separate groups.

All arachnids have the following characteristics:

What is an order, you ask? Arachnids are organized into orders. Insects are also organized this way; for example, within Insecta (the name for the class of insects) there are beetles (Coleoptera), moths and butterflies (Lepidoptera), flies (Diptera), and so on. Check out Wikipedia to see a list of all arachnid orders!

Posted in Identification, Taxonomy | Leave a comment
Ask an Entomologist
Blog at WordPress.com.