Healthy Insect Relationships: How Insects Court Each Other

A while back I wrote an article about how insect relationships are a bit … non consensual.
And these kinds of articles flood the internet because it’s all the hype and drama that you’d want to get from your morning dose of internet. But today, we’re writing about a few examples of insect courtship that isn’t all stabbing, stalking, hooks, and graspers.

And this is thanks to Jedidiah for asking about the more civilized and respectful insect relationships.

So let’s look at a couple of examples where it’s all about love … and presents.

Insects use scents called pheromones to attract mates. Moths are one of the classic examples of this where the female will sit in a tree and release a plume of pheromones. The male will follow the pheromone trail until he reaches the female to mate.

Okay … it’s really like the length of a football field, but who’s counting.
PC: Nancy Miorelli

Some insects up the game though and it’s the male that will impress the female. Orchid bees have a coplicated mating behavior where the male flies from flower to flower – usually orchids but not always – to collect the perfect mixture of fragrances. Finding his perfect solution of 20-40 chemicals can take his whole life! He’ll store these scents in a specialized groove in his hind leg which he uses to woo a female. Sometimes the male’s perfume isn’t just made of flower smells, sometime there’s a hint of poop in it too. The female that chooses him and his coctail will be infatuated for life – and only mate with him for life.

You’ve probably heard a lot of chirping, buzzing, calling, singing … whatever you want to call it, from the grass in your backyard. Grasshoppers, katydids, crickets, and cicadas among hundreds of others that you can’t hear are all trying to get a female interested.

Cicada females will respond to the call of loud and favorable males with a short snapping sound. The males will follow that sound and mate with the female who’s waiting with open arms. You can trick males into following you if you snap your fingers. This works because you’re mimicking the sound that the female produces when she’s ready to accept a mate.

When Singing Isn’t Enough – Give Gifts!

Gift giving can be seen time and time again in various insects and arthropods. It can either be used as a distraction while the male mates with the females (scorpionflies) or it can be an important part as to whether or not the female accepts the mate. 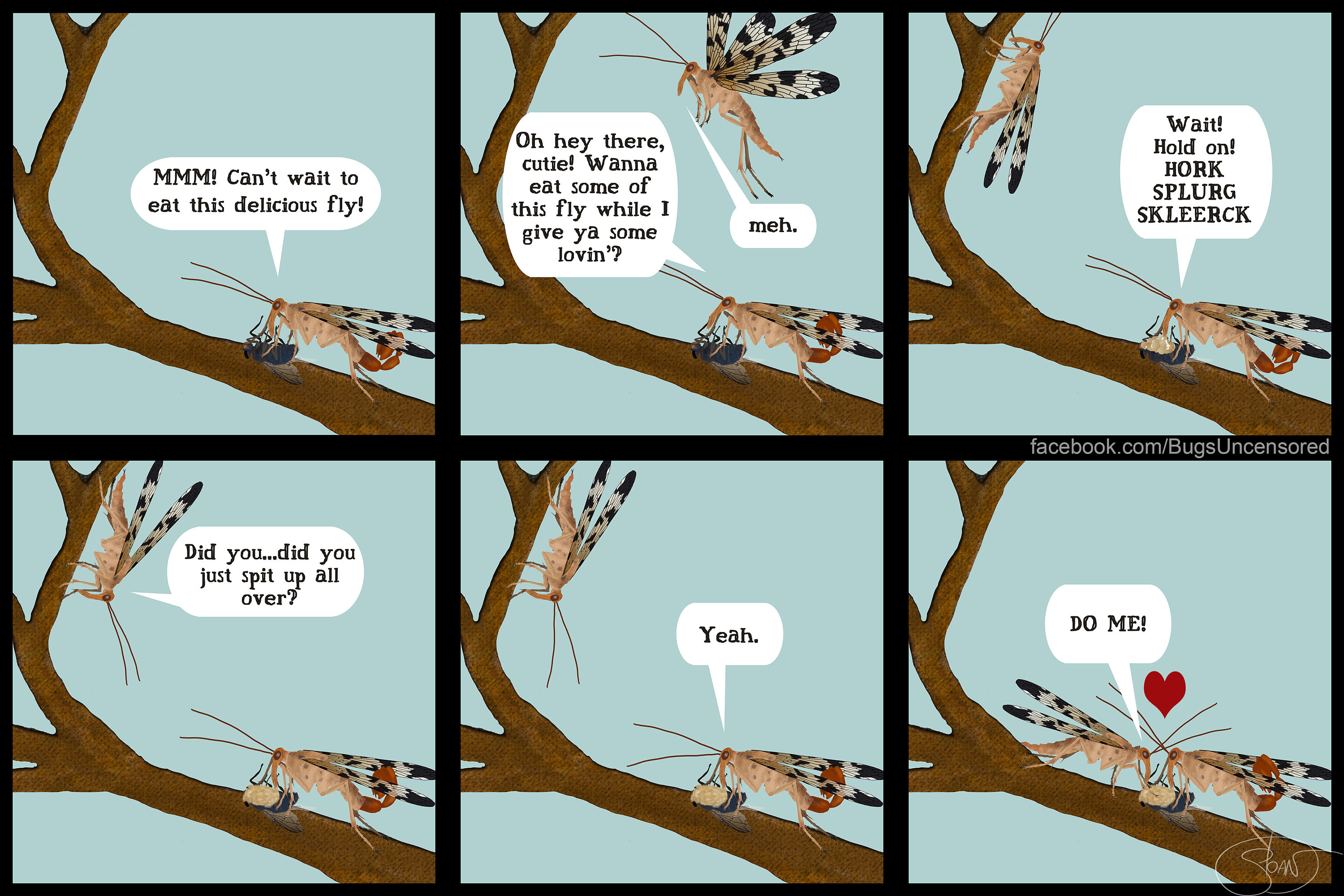 My friend Sloan Tomlinson from Entomology Uncensored created this adorable comic about how Scorpionflies use a gelatinous blob of dead bug and spit to distract females so he can grab her and mate with her.

Katydids are a great example. (Bush crickets for you Europeans out there.) While behaviors can vary drastically between species, pretty generally the male sings a song to attract a female. In some species, the female responds with a short click or buzzing sound. In others, she remains silent.

Take a look at this Handsome Meadow Katydid calling – and how he rubs his wings together to make the sound.

Sometime’s just calling isn’t enough. Males insects make sperm packets which are juicy nuggets of sperm, proteins, and minerals. The female stores the sperm to fertilize her eggs (probably – unless she mated with someone better) and then uses the proteins and minerals – presumably – for nutrition.  Female katydids seek out males with epic sperm packets because if he doesn’t have a lot to offer, she’ll just rip out the lacking sperm packet from her genital opening and nom on the sperm instead of using it to fertilize her eggs. Hey – egg making is a costly process so don’t be judge-y!

Males that produce a lot of extra nutrition will place the  sperm packet into the female. She’ll break off the nutritious nugget and just eat that leaving the sperm to fertilize her eggs. So basically everyone is happy. It’s risky for the male though because males that make small sperm packets can mate once or twice in a night, whereas these heavy loading producers can only mate 1-2 times in their entire three week lifespan.

I’ll Protect You My Queen!

Sometimes food just isn’t enough though. Like  – it’s a crazy world out there and if you’re  a bug, everyone and their mother may want to eat you. Seriously … your own brother might eat you.

To avoid this – many insects and arthropods produce chemical defenses ranging from benign chemicals that smell or taste bad – to downright killing you with cyanide.

However, making or obtaining these chemical compounds is often very difficult. You need to be well fed to either synthesize them or fit enough to run down enough prey to just steal theirs. Cantharadin a chemical used by several insects and in sufficient doses is enough to make your skin blister.

Neopyrochroa flabellata (Pyrochoridae) beetles *love* cantharadin. So much so, that you can bait males to traps consisting of crystallized cantharadin. This is because he needs to get as much as he possibly can to attract a female. In fact, he might store so much of it – that canthardin can make up 1% of his body weight! Males that can’t show that he has any cantharadin for  the female – or not enough canthardin for the females are harshly rejected. If the female accepts and actually mates with him, he bestows the rest of his cantharadin load to her. She uses some of it for herself but also passes some of it to her eggs.

Gifts Not Good Enough? Just Get Her a House.

Dung rolling beetles do just that. Might sound like a crappy way to get a wife, but for the female dung beetle – a steaming ball of poo is just what her kids need. Males will find some dung, collect it, and roll it into a ball. If a female looks on and decides that his poo ball is better than all the rest, she’ll climb atop the stool. This is risky business for the male because there’s several other males waiting in the baraks to challenge him, take his poo ball, and his female. So he’ll have to fight hard to keep his property and his girl. Once at a good spot, the male and female work together to bury the dung ball. The pair will mate and the female will lay her eggs in their newly situated home.

Many insects have rough sex which might even kill their partner. Some distract their partner with food so they can get in on some action. However, several insects have fairly amicable courting rituals from gathering perfume, singing, providing defensive chemicals, or even rolling in house.