Hooks, Graspers, Spikes, and Stalkers … Oh My! How [Some] Insects Have Sex

I’d give this post a PG13 rating.
Please don’t take dating advice from insects. Keep everything consensual in your love life.

If there were ever a species for whom sex hurt, it surely went extinct long ago.

And now, everything you ever wanted to know about insect sex. Actually, that would take too long, so here are a few highlights.

The list for animals that we know enjoy sex is rather short. We can start that list with humans and probably end it with bonobos, capuchins, macaques, and dolphins.  There is evidence that sex is just a thing animals do to make babies but actually being able to determine if they like it or not is a bit more challenging. It’s something we usually do with muscle spasms, behavior, and facial expressions. Things that don’t work well for insects.

I concede that “enjoying” sex isn’t the same as it just not hurting. I also concede that both of these are different than “Ow! That hurts!” So lets look at some insect examples.

I’ll just hang on here for a … while. You’re chill with that, right?
(Male is on top)
PC: Nancy Miorelli

How Do Insects Have Sex?

Insects have internal fertilization. The males have a penis (aedeagus) and the females have a vagina. Some females have an ovipositor which extends past the body and is used for laying eggs.  Males deposit a sperm packet inside the female which contains some food and sperm. The female will digest the food bits and store the males sperm in the spermetheca.

The female can then choose what sperm she’ll use to make babies.
Remember this part, this will be important later. 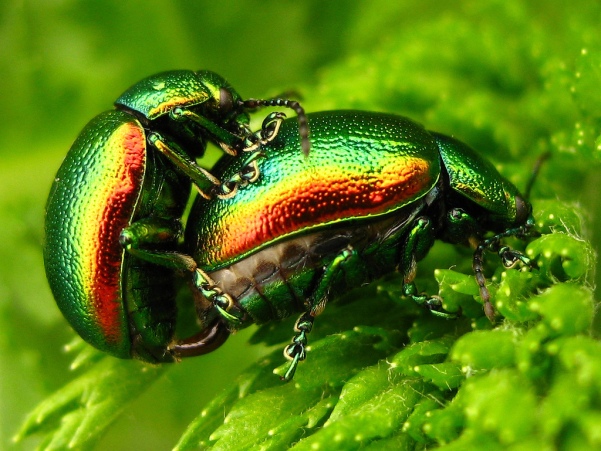 Here you can see the male’s aedeagus entering the female. The boy is usually on top.
PC: Caramosca (CC by NC 2.0)

Being a female insect is difficult. All the boys want to go out with you, but a lot of them are jealous and have bad manners. Mate guarding is a practice where the male will follow around, sit on, or literally drag the female with him to prevent other males from swooping in. Because that happens. This probably doesn’t hurt the female more than “uncomfortable” but I have seen examples in stick insects where the males have latched on so hard to the females, there’s a distinct cinch mark left in the lower part of her abdomen.

The males might not even be mating for this entire time. Sometimes the females just have to carrying them around on their back, or the males just drag the females around preventing other males from getting close. Sometimes this goes on for more than week! 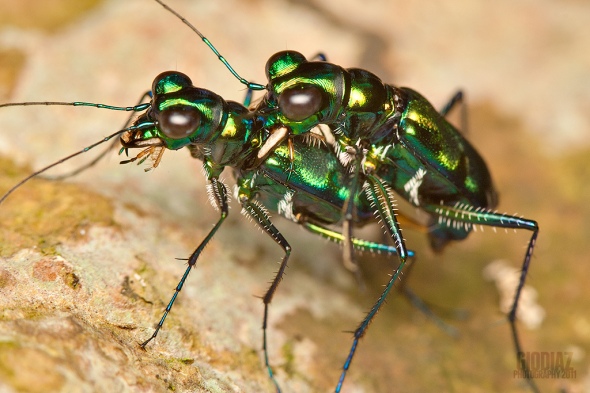 Looks comfy. The male is on top with his jaws embedded in the female.
PC: giovzaid85 (CC by 2.0)

Why does this happen? Probably because the females can pick who’s sperm to use. So if you’re a dude and you prevent your lady from ever leaving your side, she can only pick your sperm. We didn’t say it was classy, but we are suggesting that it works. 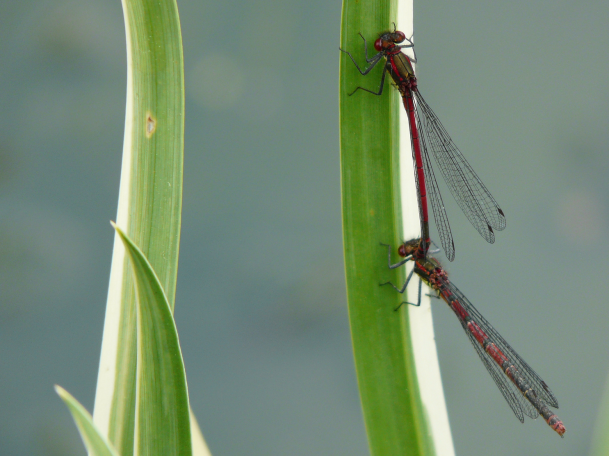 After completing the mating wheel, the male damselfly remains clasped on to the female’s neck to ensure that she lays her eggs using his sperm.
PC: Darryl Biatch (CC by NC ND 2.0)

Presumably, in the above examples the female isn’t hurt that much by mandibles or claws since she’s protected by an exoskeleton. Unless, of course the two succumb to depredation when she’s trapped. Or unless the male intentionally lures in predators to intimidate the females into going out with him. But, let’s not get hung up on that and move on.

Fruit flies have a variety of pokey bits coming out of their penis. To determine what function these bits had, I kid you not, a couple of scientists used lasers to shave the barbs off of the penises.

Bringing you up close and personal to the various hairs, barbs, and spines on the
Drosophila bipectinata penis.
PC: Polak and Rashed, 2010

They found out that the spines just keeps the females in place during their ten minute long sexscapade. If the males don’t have penis spines, the females just get bored and walk off the male while he is still trying to mate with her.

Nothing says “love” like a spiked covered penis. Seed beetles in the family Bruchidae have pensises covered in them. Like in Drosophila, these spines hold the female in place while she desperately tries to kick the males off of her. The longer the mating lasts, the more damage is done to the female. 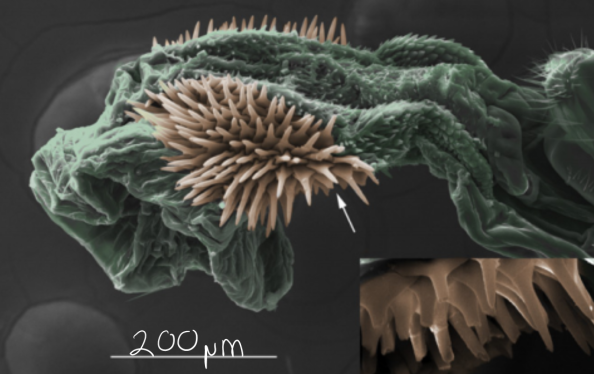 If this doesn’t turn you on, then you’re right there with the female beetles.
PC: Hotzy et al. 2012

And oh; is there damage. Her entire reproductive tract is essentially destroyed in the process. Sometimes she even dies.  So it’s in her best interest to kick hard to get him off of her and end the torture early. But why does this happen? Remember we talked about how the females can store sperm and then be choosy about it later? Well, you can’t choose if you can’t store anything. All of this guys sperm goes right to the eggs  and it prevents successive matings with other males. Bigger spines, means more damage, which means more sperm reaches the eggs. So this spiky penis is here to stay.

Penile spines aren’t just an insect thing either. Cats, bats, hyenas, and echidnas all have spiky penises for various reasons.

Warehouse pirate bugs (Xylocoris flavipes) have a simple knife like penis. If you’re wondering why this is coming last in the list after spike-traps of doom, that’s because at least with the other two options, the males had to actually stick their penis in the reproductive tract of the female. These guys just stab wherever they like. You don’t need to find the right hole if you make your own.

This is called “Traumatic Insemination and it’s evolved several different times within invertebrates. Basically, the males just stab wherever in the abdomen, sperm goes into the female’s body cavity, and makes its way to the reproductive organs. This way, if the lady doesn’t want to mate, there’s still no problem!

Bed bugs are the most obvious example of this kind of sexual relationship so why am I not talking about them? 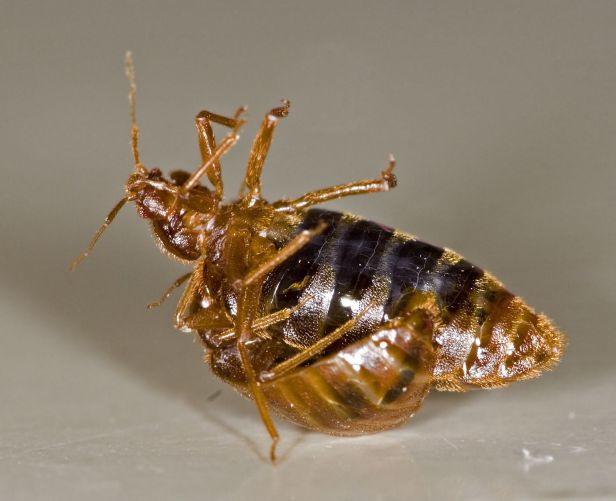 Because as much as it probably isn’t enjoyable for the female bed bug, at least she generally survives the encounter, although how she survives is under debate.

The pirate bug, on the other hand, keels over and dies after several mating events. If she’s mated once, she’ll usually just hold onto her eggs and wait around for a bit. However, after three mating events, she drops her eggs almost instantly and dies shortly after. We’re unsure if the the multiple stabbings actually makes her make more eggs, or if she know’s she’s dying and just spews all her eggs out in a last ditch effort.

One of the stab wounds experienced by the female pirate bug. In addition to just bleeding out, this is the perfect entrance for pathogens.
PC: Backhouse et al. 2012

Does Mating Ever Hurt the Males?

The example that immediately comes to mind for me is honey bees. New to-be queens start a nuptial flight – her first flight from the hive to start her own. She releases pheromones telling all the nearby male bees that she’s ready for mating and is excited to just settle down somewhere to start a family. That means, all the male bees that can smell her, fight for her. In the thousands. When a male mates with the new female, his penis rips off and gets stuck inside of her.  The male bee falls out of the air, plummets to the ground, and dies shortly after. This is to prevent other males from mating with her.

Theoretically. In practice it doesn’t work so well. Honey bee penises are equipped with a hook, which the next male uses to scrape the old guys penis out of the female. He’ll then insert his own, proceed to fall to the ground bleeding out, and eventually die on the sidewalk.

A male bee with his endowment hanging out. You can see an SEM of the hooked bit here.

There are a couple other examples of “Sexual Suicide” where willing participants seeking out sex ends in imminent demise.  Several other arthropods are known to do this including some widow spiders, fig wasps, and supposedly mantises although we talked about how it doesn’t happen that often.

If insects can’t feel pain, we might consider most of the above post a waste of my time. Here’s the CliffNotes version. I’m not about to debate if insects are conscious, can feel emotions, or are self aware. So basically, it’s complicated.

What we do know is that insects have a similar process to us  that allows them to feel something like “Something stabbed me, I should be stabbed less.” This is really the function of pain to begin with – “This stimuli is causing me damage and I should be damaged less.”

Therefore, whether insects can feel pain the way we do or not doesn’t seem to matter when you consider that several of the examples I listed lead the insects to be in increased danger of depredation, suffer gaping flesh wounds, and in extreme cases just roll over dead.

I’m not spiteful at Neil DeGrasse Tyson for this little slip up. He’s an astrophysicist so I don’t expect him to know about insects just as I hope no one will ever ask me about star stuff. However, with a twitter following of more than 5 million followers, I feel the need to set some records straight especially because many people who countered him were  vertebrate-centric. I will also note, that I was happy he just put sources that proved himself wrong, and left the original tweet up. Stay classy Mr. Tyson.

At the very least of it, females are subjected to increased depredation events due to their clingy boyfriends. Other insects have a wide array of spines and spikes to make sure the female stays put during the entire act or will rip apart the reproductive tract to prevent other males from having a chance. This doesn’t even include females who can barely survive multiple stab wounds to the body cavity before dying or male bees that fall out of the sky while the rest of their bleeding penis is flying away inside the new queen bee.

5 Responses to Hooks, Graspers, Spikes, and Stalkers … Oh My! How [Some] Insects Have Sex