Do we need to bring back DDT?

I’ve had a number of friends ask me to tackle the topic of possibly bringing back DDT. These requests go back months, and I’ve been hesitant to tackle the topic because of the politics surrounding this issue. I’ve also been hesitant, because if I tackle this topic, I want to do it right…which means this will probably be the longest article I’ve written on AaE to date. I hope that it will be the longest article, as well.

I want to tell a short personal story about Paul Offit. In 2014, I was diagnosed as an adult with autism. In some of my non-science social circles, my parents were blamed. Offit’s book, Autism’s False Prophets, helped me understand why this viewpoint existed and how to explain how the antivaccine movement hurts autistic people like myself. I admire him, but I also disagree with him on this point.

This comes on the heels of a pair of articles which had widespread press back in Feburary. One is by a blogger popular in the Skeptic community, SkepticalRaptor. The other is from one of my idols working in public health, a vaccine expert named Paul Offit. I initially wanted to tackle this in February, but ultimately decided to wait until Earth Day and World Malaria day to post these articles.

The story of the failed malaria eradication program is far more complicated than either Offit or Raptor let on. They leave out huge chunks of the story, and many of those chunks completely change the narrative. Specifically, they leave out any serious discussion of the role of insecticide and antimalarial drug resistance. They do not discuss the many administrative failures of the campaign, and neither of them seriously consider the role of economic development in malaria epidemiology.

Instead of laying out the standard DDT story most are familiar with, I’d like to discuss why the WHO’s Global Malaria Eradication Program failed, while the US campaign succeeded. Comparing and contrasting these stories is very productive, because it demonstrates why vector control is really hard.

So let’s begin with the part of the story I agree with. DDT is a chemical which has saved more lives than any other substance, with the possible exception of penicillin. That part is true.

To give some context for why this is true, we need to consider the pesticide situation in the 1940s. IUPAC has a great and accessible article on this topic, which can be accessed here. I’ll just quote the relevant section:

Up until the 1940s inorganic substances, such as sodium chlorate and sulphuric acid, or organic chemicals derived from natural sources were still widely used in pest control. However, some pesticides were by-products of coal gas production or other industrial processes. Thus early organics such as nitrophenols, chlorophenols, creosote, naphthalene and petroleum oils were used for fungal and insect pests, whilst ammonium sulphate and sodium arsenate were used as herbicides. The drawback for many of these products was their high rates of application, lack of selectivity and phytotoxicity.

Sodium chlorate and sulphuric acid are not the sort of thing you want to spray anywhere near yourself. Nitrophenol, creosote, and napthalene aren’t super great either. The pesticides weren’t that toxic to insects, which means that they had to be sprayed a lot. Beyond this is the fact that many of these are toxic to plants. So farmers who sprayed them risked some reduction in yields because of that.

With the lone exception of pyrethrum, which was far less pure than it is today, pesticides in this era were really bad for human health.

DDT began to be used as an insecticide at the start of WWII, and found its home on the battlefield being used to control lice and mosquitoes. Body lice, common in refugee camps (then and now), spread a disease called Typhus. Typhus was a major cause of death in WWI, but the advance of DDT in WWII allowed us to quickly de-louse people on the front lines. During the height of WWII, one of the first delousing stations was treating 50,000 people per day.

According to Raptor, Malaria was eliminated from the US due to DDT. It’s true that DDT played a big role in the elimination of malaria, but this comes with a huge asterisk that he neglected to mention. So first, we need to discuss the US Campaign to eradicate Malaria. This is a very important event in US history, because this project resulted in the formation of the CDC.

The CDC gives numbers for malaria morbidity and mortality on their historical webpage: 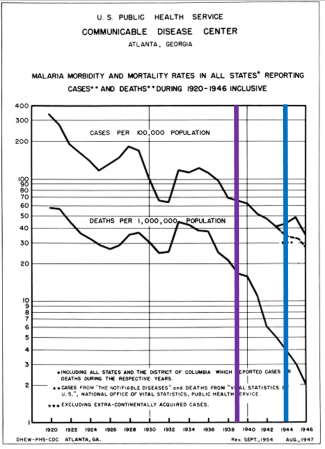 The year DDT was found to be insecticidal is highlighted in purple, and the end of WWII is highlighted blue. DDT spraying did not begin in the US until 1945. 1947, the year the malaria eradication campaign began, is not actually shown on the graph. The graph ends at 1946, one year after DDT spraying began in the US.

The numbers appear to decline well before DDT, and even before the end of WWII. Although the numbers from reported malaria deaths were criticized at the time for being over-reported because of a change in how some states reported these cases, numbers from blood smear tests still generally echo this pattern.

If we want to discuss whether DDT was the only factor in the elimination of malaria from the US, we need to examine the timeline of how malaria declined in the US. These are the best graphs I can find, and these numbers may be high, but they appear to point to some complexities. Most of the people in the elimination program believed malaria was in decline before DDT began being used widely in 1945.

One major part of The New Deal was anti-mosquito campaigns which focused on draining potential mosquito breeding grounds. At the same time, people were moving out of The South to escape the hard economic times. Historians have gone back and forth about whether drainage or emigration played a bigger role in malaria’s decline in the warmer parts of the US. Regardless, the New Deal programs and emigration-whichever one was ultimately responsible-played a big role in eliminating malaria. There were also treatment campaigns which treated people who had malaria, although some of these were unsuccessful.

In addition to all of these, we also kind of got lucky in terms of climate and vector biology. The main malaria vectors in the US didn’t specifically feed on humans, which made them kind of bad at spreading disease. In terms of weather, in most of the US, winter gave us a period of time when malaria wasn’t transmitting. This gave public health workers enough time to get ahead of the malaria cases. In many regions where malaria persists today, it is transmitted by mosquitoes which feed specifically on humans year-round.

Louis Laval Williams, the architect of the eradication efforts, wrote about these factors at the time. DDT is was what eventually allowed us to knock out the disease, but…well, I’ll just quote L.L. Williams:

This brief history has shown how the habits of man encouraged production of [the type of mosquitoes which spread malaria] and spread malaria to much of the United States. Also, how the changing habits of man caused its retreat to the southern states. But, in the South, an active attack against anophelines had to be added. Years of control works were steadily reducing malaria and would doubtless have resulted in eliminating the disease, but its eventual termination date was not readily foreseeable.

The reason we don’t have malaria in the US is because of a combination of sanitation efforts, treatment programs, inefficient vectors, climate, urbanization, and changing economic times. DDT certainly dealt the death blow, but it’s inaccurate to say that we do not have malaria because of DDT. There were a lot of factors which allowed us to be successful, and DDT was only one of them.

Based on successes during WWII, and the successful US campaign, the WHO started their own campaign. Because of the good results in other countries (namely, the US), it was promising at the beginning. However, scientists of the day were unprepared for the complexity of a worldwide campaign.

The actual problems with the WHO’s global malaria eradication program are far more complex than a ban on DDT. There were failures up and down the board, both administrative and technical. Many of these failures resulted in poor surveillance, and complacency for a number of reasons. This poor surveillance and complacency allowed the disease to rebound, and that is a large part of the reason why malaria’s still around today.

DDT is still widely used today. In fact, its use never actually went away in many countries. At least 4.5 million tons of the stuff is produced annually, most of it coming from India and some of it coming from China. North Korea also produces some, although it’s unknown how much they actually export.

DDT is still allowed to be used for indoor residual spraying by the WHO, and many countries use it for agricultural purposes as well. Agricultural use is not exactly legal, but we know DDT is still used this way…and we may as well acknowledge the data exists. India seems to be the leader for this, having used 3.4 million tons just for vector control alone in 2007…although it’s important to mention that many countries lack accurate reporting data.

India still has a lot of issues with malaria, despite the fact they’re the heaviest DDT using nation in the world (as far as I can tell). It’s almost certain that the numbers are much higher, because the rampant poverty that accompanies malaria everywhere it goes also causes many people to suffer without treatment.

So bringing back DDT won’t be a magic bullet for malaria, or any disease vectored by Aedes mosquitoes for that matter. Vector control requires more than just indoor residual spraying. It requires a lot of complicated tools to look for disease, and kill mosquitoes before they can bite.

On Tuesday, which is World Malaria Day, I’m going to explore some of the issues surrounding vector control in an area where DDT is still commonly used. I’m also going to talk a bit more about the economics of pesticide production, which is a really important topic rarely discussed in the blogosphere.

van den Berg, H. (2009). Global status of DDT and its alternatives for use in vector control to prevent disease. Environmental health perspectives, 117(11), 1656.

1 Response to Do we need to bring back DDT?