Do insects get trapped in water drops? Why aren’t they constantly drowning?

Question: Is it true that very small insects (e.g., ants) can get trapped inside water drops due to the high surface tension forces of water?

We got this question in the comments of Nancy’s post, What do Bugs do When it Rains?

Also, in our email, was this question:

Your Bug Question: What happens when moth’s wings get wet ? Can they fly afterwards, or they’re damaged for good ?

I view these questions as related, because they deal with the consequences of getting wet.

Termites who landed in a birdbath. The relatively large surface area of their wings had adhered to the surface tension, and effectively trapped them on the surface. Image credit: KenMcMillan, via Flikr. License info: CC BY 2.0

Free-standing water is an everyday part of the environment. When people think of free-standing water, lakes and rivers are what usually come to mind. These are important habitats, but there are also other sources. Dewdrops in the morning are a big one, and plants can produce water in the form of guttation drops.

In captivity, free-standing water is also an issue. Larger arthropods, like tarantulas, can be watered using what amounts to a mini dog bowl. However, when culturing small insects, water droplets are deadly more often than not. Smaller insects also need to drink, and can end up trapped in the water droplet.

In captivity, water presents a special issue for moths. If the side of the container is wet, they can brush up against the sides of the container. The water sticks to the scales, and pulls them off. The scales are somewhat important for flight and species recognition in the wild, so this would be bad for them.

For other insects, like springtails…water is not a problem so long as they don’t get submerged. They can play on water droplets all they want, because they have built-in water repellents.

For that matter, larger insects also need to have a way to deal with water. After all, if you’re camping out all night (as bugs always do), you’re going to wake up covered in dew every once and awhile. This is a problem for butterflies and moths, due to those scales.

So to answer the first question…yes, smaller insects can (and do) get trapped in water droplets and drown. That, however, leads us into the second question…why aren’t insects always drowning? Why aren’t they constantly glued to themselves because of water?

Why do delicate structures, like scales, stay on wings if surface tension is such a big deal to tiny animals?

Water is a funny substance. When you’re big, you hardly notice it. However, when you’re small, water has totally different properties. Surface tension, the tendency of water to stick to itself, can be a really big deal for tiny animals.

Water is comprised of two hydrogen atoms and an oxygen atom linked together in a specific way. Hydrogen and oxygen have a unique interaction which causes water to stick to itself. The hydrogens in water create weak bonds with the oxygen atoms of neighboring water molecules. Lots of weak bonds adds up to a bunch of strong bonds, and this creates surface tension. Consequently, the surface tension of water is a lot like glue to smaller animals.

So here’s how various insects keep themselves dry. 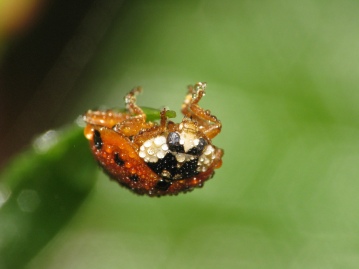 The first line of defense against the elements insects have is a wax layer on the outside of their exoskeleton. Unlike a lot of biology stuff we talk about, this isn’t a fancy term…they’re literally covered in wax just like a sports car. This wax keeps the insect from drying out, but it also repels water.

Waxes don’t interact with water the way it interacts with itself. Waxes don’t form hydrogen bonds, so water doesn’t stick to it. Instead, water tends to slide off of wax, and won’t stick to the bug.

However, the lipid layer isn’t completely hydrophobic. There are a lot of reasons for this, but one of the more important ones is that the layer also contains proteins. Proteins attract water. So there is some attraction to the exoskeleton. Not a lot, but enough so that some insects need more than one way to keep water off.

Hair is another way that insects can keep water off of them. The way it works is a lot less complicated than wax. When a hairy bug gets water on it, the hair lifts the droplet off the exoskeleton. It’s very simple, but also very effective.

The springtail in the video above is covered in a very thin layer of fuzz. This fuzz keeps the water drop off the bug by allowing the bug to distribute its weight more evenly across the water. In essence, the hair acts a lot like a fuzzy bed of nails.

Bumps, scales, and other textures

A lot of bugs need to be shiny to survive, so hair isn’t really an option for them. Morpho butterflies, for example, need to keep water off their wings so they stay reflective. They use their scales to find mates over long distances, so they need to stay as shiny as possible. If water gets on the wings and dries, it can make the wings dirty. Their wings are really big, so if they get wet, they can’t fly and take forever to dry out. Since these butterflies can’t clean their wings with their legs, they need to prevent them from getting wet in the first place.

Morpho has this really cool system in place where water runs right off the wings.

In order to do this, they take advantage of the texture of their wings. If you look at the wings under a microscope, the scales have tiny ridges running down their sides. This has an effect similar to the hair, and lifts the water drop off the insect.

Even though the water touches the insect, the area it touches is very small. Because the area the water drop touches is so small, there’s virtually no friction between the drop and the exoskeleton. Without friction keeping the drop on the wing, it just runs off the bug’s wing.

There’s another neat layer here, though. The water on Morpho wings doesn’t run in random directions. It always runs towards the edge of the wing, instead of towards the insect’s body.

So how does it achieve this sort of funneling?

Findings if Liu et. al 2014, simplified. It should be noted that the scales themselves form arcs, which amplify this effect by adding another layer of ratchets the water drops can travel on.

This is all dependent on water’s ability to stick to itself. In the video above, the author put alcohol on the other wing. Alcohol doesn’t stick to itself very well, and has much less surface tension than water. Because it doesn’t have much surface tension, it runs between the scales and eventually evaporates.

Other insects have bumps which do something similar, but the Morpho wing is the most complex and most effective way to channel water in a particular direction.

Why is this studied so much?

How different animals keep water off themselves is really interesting to entomologists for a few reasons. The obvious one is what I do for a living: pesticide development. Insects which slick off water are really hard to control, because the pesticide slides off before it can be absorbed.

The more interesting reason, and the one that’s more economically important, is more for things like street signs, traffic lights, and solar panels. These are also structures that can’t get dirty, because it would be really expensive to pay an army of people to run around and clean them.

Solar panels, in particular, would really benefit from being able to self-clean like butterfly wings. If we could prevent dirt buildup, we could really make these things more useful and last longer.

So figuring out how insects keep water off themselves could lead to some important breakthroughs in the field of sustainable energy.

Insects keep water off themselves the same way we keep sports cars shiny: they have a waxy coat. In many insects, tiny hairs also play a role. They also have micro-structures that allow water to slick right off them.

Hopefully, given enough R&D, we can harness this power in some really neat and useful ways.

This entry was posted in Ecology and tagged Butterflies and Moths, Chemistry, Physics, Survival, Water. Bookmark the permalink.

3 Responses to Do insects get trapped in water drops? Why aren’t they constantly drowning?