Why is Oxitec using tetracycline for a genetic switch? Why not something else?

Here’s where we get to the meat of the question our follower asked…why use the antibiotic tetracycline as a switch? Why not something else?

Last week, we discussed a system which could potentially work for this sort of application by forcing mosquitoes to incorporate artificial building blocks into their biology. However, no research group has attempted to develop mosquitoes using Genetic Recoding technology.

@BugQuestions why use antibiotic? bc its understood? why not use a dietary nutrient mosq can’t easily acquire in nature?

How are these mosquitoes made?

To make transgenic insects, you inject DNA into the eggs while the embryo is developing. The DNA needs to insert itself into cells which will eventually become the reproductive organs, so you can breed the gene into a laboratory population. The process is not very efficient, as relatively few insects will uptake the genes in this manner. In Drosophila, the standard model organism, the success rate is 3% or less. If you need the gene in a specific place, it will take a lot more tries since the genes land in random places. The video below shows how scientists inject DNA into fruit flies for this process.

Here’s where we can answer the first part of our follower’s question. We can’t use Genetic Recoding, because mosquitoes are hard to rear in captivity. With bacteria, you can insert genes into millions of cells with the effort it takes to insert genes into one mosquito. Culturing bacteria is easy, because their generation times are measured in hours. The generation time of mosquitoes is measured in weeks, and you’ll need a lot of mosquito generations to make Genomic Recoding work.

The technology for Genomic Recoding just isn’t advanced enough for this sort of use, sadly.

In order to use this sort of system, you need something you can turn on in the lab and off in the field. The antibiotic tetracycline is broken down in animals slowly, so it works pretty well as a switch. This sort of system was popular with medical researchers when these mosquitoes were developed, and is still in use in labs all around the world today. In fact, a lot of papers which describe transgenic mosquitoes developed for this sort of application do use this exact switch.

I’m going to point out that, while the equipment used is involved with antibiotic resistance in E.coli, it’s not really an antibiotic resistance gene. The machine which E. coli uses to fight off tetracycline is a pump called TetA, which pumps tetracycline out of the cell. The parts of the gene used in the mosquitoes, described in detail here, simply tell the bacteria to make the pump that confers resistance. Without that pump, there’s no resistance…and it’s unlikely this equipment will transfer into another genome. Anastasia Bodnar discusses this further on Biology Fortified. 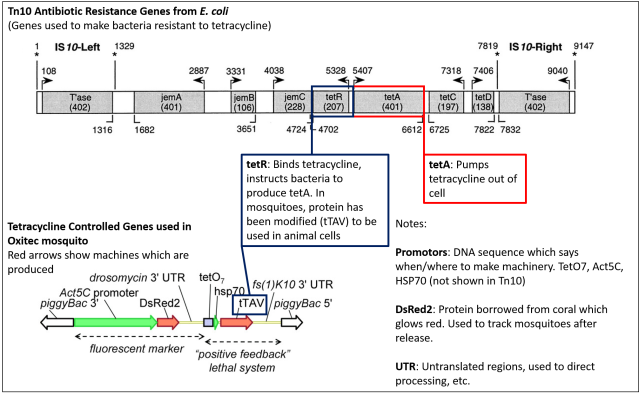 The portion of the tetracycline resistance gene which allows bacteria to survive a dose of tetracycline (tetA) has not been introduced to mosquitoes. The switch (tetR, modified to tTA) which tells bacteria to make that pump is what has been inserted. Figures from Chalmers et. al (2000) and Phuc et. al (2007) modified from originals by Joe Ballenger to show components.

By placing other stuff in place of that pump, you can get the mosquitoes to change their biology in predictable ways. For example, Oxitec has produced another transgenic mosquito strain where females don’t make wings outside the lab. Because you can switch parts in and out, there are a bunch of potential targets which could be used to re-enforce this system. So it’s very flexible.

This system is very well characterized, and is the most popular system for making these sorts of switches in whole animals. Consequently, a lot of people know how to use it. It’s not the only molecular switch on the market, and there are other sorts of switches that can be used.

What about other systems?

By the way…I’m not familiar with every system on the market. If there’s one I missed, post a link in the comments and I’ll edit this section.

Why not target the disease-causing agent itself?

There are scientists who are working on this approach, and I think this approach does show promise, but I also think it’s hampered by a few things.

First, there’s not a lot of information about how these parasites interact with the mosquito. Mosquitoes try to fight off these diseases, but the parasites have their own counterattacks. The information needed to develop these approaches is rapidly advancing, but it’s still in its infancy at this point.

Second, and more importantly (in my opinion), there’s the question of economy. The same problems with vaccine development in people come up with mosquitoes, as well. Aedes can vector over 20 different viruses, each of which is unique. The viruses infect the mosquitoes in different ways, and something which targets one virus might not hit others.

Since we’re talking about Aedes, there are currently 4 different viral pandemics in need of control (Dengue, Yellow Fever, Chikungunya, Zika), plus a lot of smaller-scale potentially problematic viruses. Each modification may need to target a different virus unless scientists can find an important gene that’s basically the same between them. This approach might work for Malaria, but I’m not too sure it will work well for viruses.

There is an approach, using the symbiont Wolbachia, which appears to show promise in fighting Dengue because it creates a sort of broad-scale heightened immune system activation. Conceivably, this could also apply to other viruses…but it hasn’t been addressed in the literature. However, transgenic approaches tend to be a lot more narrow in scope so I’m not sure if this comparison applies here. I do think it’s worth mentioning, however.

While I think it’s a good idea worthy of further research, the TetOn/Off approach works in the here and now with what we have…and that’s really important. At this moment in time, targeting the mosquitoes is the easiest option and the furthest advanced.

Regulation of these insects is an important topic, but unfortunately it’s one that I’ve got to skip over. Very briefly, because the technology is new, there are some things which still need to be worked through. Regulatory mechanisms are incredibly complex, and there’s just not enough room for an in-depth discussion because there are other things I want to cover.

PLOS Neglected Tropical Diseases has a series of papers (cited below) which give a good overview of these issues from the perspective of both industry and government regulators. They’re a few years old, and were published before the results of field trials were available, but they’re still relevant. I think they do a good job of describing the regulatory challenges, and I’ll refer you to those papers for details.

The regulation is based on existing protocols from agriculture (transgenic crops, biological control releases, and existing sterile insect programs), as well as drug trials. They’re regulated differently than GM crops, and many scientists consider these types of releases low-risk because they’re designed to extinguish themselves.

A lot of scientists demand that the data from lab trials be made publicly available through scientific publications, but this is hampered by the tendency of journals to only publish positive results. If there’s no difference in mating ability between a modified and unmodified mosquito, or if the mosquitoes don’t hurt stuff that eats them, it’s just hard to publish something like that. This is why PLOS ONE is such a great journal…they publish this stuff. So that information is out there now, and this problem should be less of a barrier as time goes on.

That’s not to say, however, that these releases are unregulated. The WHO has guidelines for this sort of testing. There’s also an international treaty, the Cartagena protocol, which regulates many aspects of transport of GM organisms. Regulation is mostly under the control of the countries the mosquitoes are released in, and details will be slightly different between countries. Right now, the mosquitoes have been approved for release in Brazil…but there’s some unknown issue holding them up.

The reason tetracycline is used for this sort of system is because it breaks down slowly in the mosquito, and won’t kill it. It’s also a system that’s very common and well understood. So there are good reasons tetracycline is the best choice, given the technology available to us.

I admit that I want to see this approach work, and I am by no means alone in the scientific community. Mosquito control isn’t very effective, and hasn’t changed much in 100 years. We need new tools. Badly.

One inevitable criticism of this series of articles is that I didn’t talk about the issues with regulation enough, and I accept that criticism. It’s something which should be tackled more thoroughly, but I want to direct my efforts towards discussing the results of the field trials. So that’s where we’re going to go next time. We’re going to travel out of the lab, and back to Brazil to see how mosquito control is working down there.

Karl Haro Von Mogel and Dasya Petranova for looking over the figure used in this post.

7 Responses to Why is Oxitec using tetracycline for a genetic switch? Why not something else?