We’ve gotten this question, and it’s a really good question, but I didn’t initially understand what the person was asking. I knew what they were getting at-why is Oxitec using a tetracycline dependent system-but I wanted to wait for them to expand on this line of questioning before I started tackling it.

@BugQuestions why use antibiotic? bc its understood? why not use a dietary nutrient mosq can’t easily acquire in nature?

So the first part of the question, a part that’s only implied, is simply is it even possible to do this?

When making a chemical switch, you need to use something mosquitoes don’t need to live and which they won’t find outside. So switches activated by things bugs eat are off-limits, because you won’t be able to turn the system on/off in a reliable way. You might not be able to raise the bugs in the first place, or control in the field won’t happen.

You can, however, make the mosquitoes need something not found outside. There are only a few amino acids used in nature; most critters use the same 23 amino acids. There are also a few weird ones sometimes used by living things. Scientists have also created over 500 amino acids which are only found in laboratories. They’re not found outside, and most of these aren’t made by any organism.

So is there even a way to engineer a system that allows mosquitoes to be dependent on non-standard amino acids?

How does Genetic Recoding work?

Amino acids are chemicals which look like this. Proteins are made of these chemicals linked together.

Transgenesis has been talked about a lot, but Genomic Recoding is very new. Genomic Recoding is different because you’re using a new set of biological building blocks instead of shuttling DNA around. Genetic Recoding itself was only developed in 2013, and the tools it uses are less than 10 years old. 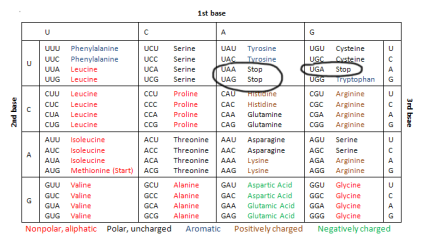 A codon table, which shows the standard genetic code. DNA uses four paired letters, G-C, A-T. U is used instead of T in mRNA. The stop codons have been circled by Joe Ballenger.

You can think of this whole thing like rewriting a computer’s operating system. All critters use the same OS, a DNA code which makes proteins. These proteins are made of building blocks called Amino Acids, and almost all organisms use the same 23 Amino Acids to build their proteins. In the genetic code, there’s a pretty high degree of repetition. DNA uses a system of things called ‘codons’ which allow many codons to stand for the same amino acids. That way, if a mutation happens, it’s likely to not change anything.

The so-called ‘central dogma’ of protein making is shown to the left here. Simplistically, DNA is translated to something called messenger RNA (mRNA). The mRNA is read by a big cell machine called a ‘ribosome’ to make the protein. Inside the ribosome, the mRNA is read by another RNA-called Transfer RNA (tRNA)-which is attached to an Amino Acid. The amino acid gets there using an enzyme called aaRS*, which tacks a specific amino acid onto a specific tRNA.

So to recode an organism, you need to do 4 things:

Step 4, by the way, is not easy. Cells are always on the lookout for foreign DNA, because that foreign DNA is usually a virus which is looking to destroy the cell. In fact, this technique was originally developed as a way to keep cheese and yogurt cultures free of viruses which would destroy the bacteria before it had a chance to turn that milk into something delicious.

The dairy industry is intense when it comes to biotech. Given the value of the bacterial cultures they work with, they need to be.

This is where MAGE and CAGE come in.

Step 4: Getting everything inside the cell

Viruses are amazing and useful creatures. Those bacteriophages which hijack bacteria also help us save them, by donating some spare parts. Specifically, there’s a protein called Beta** which comes in really handy for joining DNA strands. Those bacteria also have fixer enzymes***, which seek and destroy foreign DNA. It’s a vital part of the bacteria’s immune system.

MAGE and CAGE are two different processes. Put as simply as possible, MAGE is repeatedly getting the cells to take up DNA at random. CAGE is re-isolating those bits which joined together in the way we want, and then repeating MAGE over and over again…selecting the desired pieces as we go.

The process is messy, but the end result is actually very precise. MAGE and CAGE allow us to slowly take bits and pieces of the cell’s genome, and insert them little by little. Making a genome from scratch is possible, but still fraught with difficulties at this point. Troubleshooting this sort of code is really hard, but MAGE and CAGE are a way around that. After all, if the DNA gets jammed into a really important spot in the genome…the bacteria simply won’t grow. So there’s an evolutionary component to that as well.

To recode the organism, you take a bunch of DNA where a rare stop codon has been turned to a more common stop codon, and go through the MAGE/CAGE process. Somewhere in that DNA, you also need to encode the modified tRNA and aaRS pair.

In 2013, a team lead by Marc Lajoie published a paper where they took E. coli and reassigned the stop codon UAG to code for phosphoserine. Phosphoserine is not a natural amino acid; it’s not found in nature. That same year, the team made the system more redundant by replacing several other rare codons with similar amino acids using the same method.

So reprogramming the genome works, and it could potentially be used in the same way as the Oxitec mosquitoes. However, as far as I know, it hasn’t been done with animals. The closest I can find is genome editing in a nematode from the same lab, but this is a very different thing. Another group also used algae chloroplasts to do something similar to what Lajoie did.

Biotechnology is developing fast, faster than these sorts of techniques can be understood by the public. This is what our follower was talking about:

@BugQuestions sry if too many questions 🙂 Yes explain synthetic aa too. https://t.co/3WajVohoML #thirstyforknowledge

Indeed, there are many potential ways to do this. There are also new techniques which are being developed all the time, one of which we just described in detail.

So why the tetracycline-dependent system? Is that, like, vital to this approach for some reason? Is there another way to do it that might work better?

If so, why hasn’t that been adopted yet?

That’s what we’ll discuss next time.

Special thanks to Cat Chapman for proofreading, and help code-shifting some of the more complicated bits.

I love biochemistry, I really do. However, the nature of the stuff we talk about pretty much demands that I constantly change the names of things just so I can talk about them. If you want to know what the *real* names are for some of these things, I listed them below.