Why do Mantids Only Have One Ear?

In my opinion, one of the more interesting questions about mantids we received concerns how they hear. 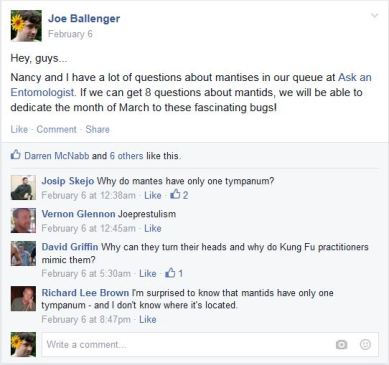 As humans, we have two independently functioning ears which are located on our head. This works very well for us, and we use our ears for a number of reasons. We use them to communicate with one another, avoid danger…and for those who enjoy music, we use them for pleasure.

So…why do mantids have such an unusual method of hearing?

Before we answer this question, we really need to back up and look at how insects use sounds. After that, we’ll talk about mantids specifically.

Why do insects need to hear?

Insects and humans hear for reasons which are pretty similar. Many insects need to communicate with one another. They also need to find food and avoid danger. They probably don’t listen to music, but a lot of the ways they use sound are something we can identify with.

Finding a mate, or communicating with roomates is probably the first thing which comes to mind when talking about…well, talking. I’m a single guy, so I’m usually in the process of trying to find a mate in my spare time. I also work in a large laboratory with many co-workers, so sound plays a huge role in my life because it’s my primary mode of communication for these purposes.

Insects definitely have a need for these sorts of communications, as well. The most recognizable insect sounds, the songs of crickets and cicadas, are mating calls. Crickets, in particular, also use sound to communicate with rivals.

The video below shows pairs of male and female crickets, with the males using their wings to ‘sing’ to females to woo them:

In some cultures, cricket fights are very popular. Males battle for territory and will use the same structures, presumably to trash-talk one another, while fighting:

This sort of communication isn’t limited to crickets by any means, and communication between insects can be extremely compicated. Bess beetles, for example, have their own ‘language’ which consists of at least 7 different ‘words’ which adults and larvae use to communicate with one another. 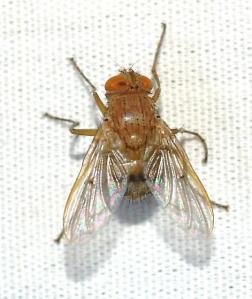 Finding food (or hosts, in this case) is probably the most important activity insects undertake. Everything needs to eat, and insects are no exception.

Flies of the genus Ormia have what is probably one of the more complicated hearing structures. They have a pair of ears on their thorax, which they use to locate their cricket hosts.

These flies are very well adapted for eavesdropping on insect communications, because they use the noise their hosts make while looking for mates to find male crickets and deposit their eggs. Researchers who study these flies actually find them by recording their host calls, and playing them over loudspeakers.

Wasps also use sound to find hosts, although they use a very different method to do so. Wasps which feed on woodboring insect larvae actually use sonar to locate their hosts.

Predator avoidance is another very common reason insects need to hear. The most important predator of moths are bats, so moths have a very large repertoire of defenses they use to solve this problem.

So hearing is really important to insects, and it’s independently evolved multiple times in every group of insects over the course of insect evolution. Crickets have ears on their front legs, while grasshoppers have them on the back of their thorax. Ormia has ears on the front of it’s thorax. Moths have them on their abdomen.

Ear. Singular. They only have one, which is weeeeird.
Photo Credit: Nancy Miorelli, used with permission.

Mantids only have one ear, located in the middle of their middle and hind legs. It’s split in half, but both halves function as a single unit. There’s a single neuron which connects them, and it fires if either half ‘hears’ anything. In essence, they only have one ear. If you look closely at the picture, you can see it. This doesn’t make sense for a lot of applications. For example…

See, mantids are visual predators which hunt in daylight. They sit and wait for insects to toddle by, and grab them when the fancy strikes. They don’t need sound to do this, and a single ear won’t give them any way to locate prey by sound unless it’s already within striking distance. So, from the location of the ear…and the fact there’s only one…finding prey seems to be ruled out pretty quickly. Which leads us to the hypothesis of…

Mantids do produce sounds when startled, and males and females do make slightly different noises. Some insects actually use alarm pheromones to determine the sex of a potential mate, so the idea of mate recognition by alarm signaling isn’t farfetched. Mate recognition is a good hypothesis, but the sounds they make are too low-pitched for them to hear. The sounds they make (for which I can’t find any recordings) are about 8khz, which is well within the range of human hearing. Mantids appear to find mates using smell and visual cues, so it’s unlikely sound plays a role.

So it’s possible they squeak to deter predators like a lot of other insects…but it doesn’t answer the question about why they need to hear. It’s just an interesting aside.

So…what do mantids need to listen to?

It turns out that they listen for the same thing most other insects listen to…bats. If you’re an insect, bats are just about the scariest thing around. They’re big, they’re fast, and they love to eat large and soft bodied insects…which makes mantids a good meal.

Well, after mantids become adults they fly as far as they can in a dispersal flight. Some species do, anyways. Chinese mantids, like the one above, don’t really disperse. So, some mantids need to avoid bats. It appears to depend on the exact species and their habits.

So, for the mantids which disperse at night, they’re able to hear bat calls. When they hear a bat, they drop out of the air and flutter to the ground in a reflexive response, captured by Amato, 1991:

So, mantids can hear bats and take measures to avoid them. Case closed, right?

See, there’s a still a lot of questions about mantis hearing. Most of this research was conducted in Mantis religiosa, the European Mantis. A lot of this I cobbled together from research on other species, which may hide some really important details. Mantids are a huge and diverse group of insects with wildly different habits, and it’s likely that not all mantids react the same way to a bat attack.

There’s also the question of how important hearing is in mantids. When the mantis Parasephendale agronia goes up against bats, hearing only accounts for 25% of escapes. The rest appears to be mediated by another sensory organ, the cerci, which detect air currents set off by the bat when it attacks. The lack of directionality, which would be given by two independently functioning ears, means that it can’t sense the direction the bat is coming from. There’s also the question of whether the ear’s location-in the folds of the legs-affects the hearing of the mantis.

There’s also the question of whether the mantids can detect all bats. For the most part, mantis hearing is best between 30 and 60 khz, while bats echolocate at 14-100 khz. There’s a lot of overlap, but many bats call at frequencies that mantids can’t detect. Of course, bats will call at frequencies which are most effective at catching prey in their area. There are also mantids, such as P. agronia, which have a wider range of hearing than other mantids.

Evolution is a funny thing. It’s produced many systems which are nearly perfect, but it also produces systems that barely work. Mantids are beautiful and effective predators, but their ears seem to just barely do the job they need to do in order to ensure the survival of the mantis. Overall their ears do work, but just barely. There’s no adaptive significance to having one ear, and this system is likely an evolutionary holdover from their cockroach-like ancestors.

That’s the thing I like about evolution, though. You don’t have to be the best, you just have to somehow get by.

If you’re wondering if you can talk to a pet mantis, consider their range of hearing. They can hear at a range from 30 to 150 khz, while human hearing maxes out at 20 khz. Our voices are too low for them to hear. They might seem like good listeners, but they just can’t hear you.

As a random aside, Nancy’s favorite singer just happens to be Taylor Swift. Taylor Swift’s first job was picking mantis egg cases off Christmas trees to keep them from hatching in the houses of customers. I think it’s kind of ironic that, despite the fact that Taylor Swift’s world has been touched by mantids, mantids effectively live in a world without Taylor Swift.

Special thanks to Margarethe Brummermann for donating her Ormia picture for use in this article!

4 Responses to Why do Mantids Only Have One Ear?