Do male insects have sex hormones?

This is a really good question, for a number of reasons. There are sources which claim that male insects don’t contain sex hormones, but as far as I can tell, this goes back to a 1995 paper where a group of scientists weren’t able to replicate the results of a 1966 paper which explored this topic.

So even in graduate school, it kind of surprised me that this topic isn’t better studied.

We’ve talked about how insects produce male and female insects, and I’d refer you to these posts for an idea of how that works. Instead of talking about how bugs make boys and girls, this post will be about how the boy and girl parts get booted up so they can begin making babies.

There’s a lot of hormones involved, which are explained in Nancy’s video. Briefly, a hormone called Juvenile Hormone (JH) keeps the insect from turning into adult. Another hormone, 20-hydroxyecdysone (20-E), tells the insect to shed it’s skin. These hormones are conserved throughout insects; all insects use these hormones in the same way. This is a very important system, and is essential for understanding how insects turn into adults.

What happens in female insects? 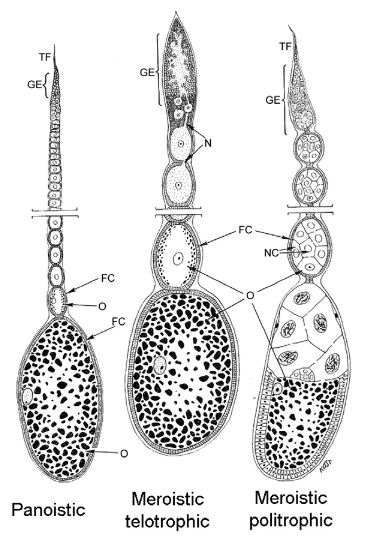 Insects have a few different types of ovaries, but all of them have eggs which get bigger as they absorb yolk proteins. The whole egg-making process is worth a post itself, and involves pretty much the whole body. Image credit: Belles and Piulachs 2015

Hormones are how the different cells in the body talk to one another. The endocrine system is what allows the body to tell itself what’s going on. Without endocrine systems, the body wouldn’t be able to function…and a lot of pesticides work by throwing these systems off-kilter. To understand what’s going on in boys, we need to talk about the girls. This is because the female system is better understood.

Female adult mosquitoes represent a more complex reproductive regulatory system. At this end of the spectrum, the adult repurposes the two hormones used in larval moulting for very different purposes.

JH: Produced by the ovaries after the adult female emerges, this hormone’s function is now to tell the fat body to prepare to make yolk proteins by making more DNA and translating yolk genes, and makes the ovaries respond to 20-E.

20-E: After a blood meal, the mosquito’s gut makes a protein that tells the ovaries to start producing 20-E. 20-E tells the mosquito’s fat body to make the yolk protein. These proteins get taken up by specific cells in the ovaries, and get passed on to eggs.

Ecdysone is what’s called a prohormone. It’s not thought to be active, and it needs to be activated before use. Image credit: Ceyockey (20E) and Ayacop (E) via Wikimedia commons. License info: Public Domain

At the more simple end, there are a lot of non-feeding insects which have seemingly evolved to have their reproductive systems run on autopilot, with minimal assistance from hormone signaling.

Because reproductive signaling in insects is so complicated, we can’t really go in-depth. Typically, though, the same hormones that are involved with guiding the insect through its larval development are what regulate the reproductive system. These hormones are usually regulated by the nutritional status of the insects.

The topic of male sex hormones has been championed mainly by a scientist by the name of Arnold De Loof, who has been writing on the topic for years. According to him, many scientists believe that the presence of gynandromorphs in insects disproves the idea that sex hormones are involved in development. Male birds, however, have sex pheromones…and there’s been gynandromorph birds which have been recorded.

Gynandromorphs are animals which are both male and female. There’s a bunch of different types, but the specific type of gynandromorph that De Loof mentions is the type where one half of the body is male and the other half female. Image credit: ap211 via Flikr. License info: CC BY NC 2.0

The system De Loof studies is the desert locust, Schistocerca gregaria. When reared in crowded conditions, this species changes its form into a gregarious form that causes plagues. The gregarious males, after this transformation, turn yellow…and females do not. De Loof is interested in why the males turn yellow, and why females don’t.

If you treat male locusts that have been raised with lots of friends (e.g. non-gregarious) with JH, they turn yellow. Females, however, produce JH to regulate their reproductive systems…and they don’t turn yellow. Interestingly, a steroid called ecdysone (E), which is the precursor to 20-E, also causes males to kind of turn yellow…but neither hormone causes the insect to become as yellow as the gregarious males. 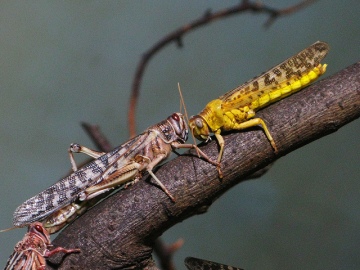 Yellow in locusts is a secondary sex characteristic, like beards in men. The one on the left was raised alone. Males which have been raised in crowded conditions turn yellow, like the one on the right.  The signals which cause them to turn yellow aren’t well understood, but it’s thought to involve some sort of hormonal regulation. Image credit: Holly via Flikr License info: CC BY NC 2.0

So we know that JH and E are probably involved with making the insects yellow, but they’re also produced by both sexes. E works in a sex-specific manner, but doesn’t produce the amount of yellow we’d expect to see in a properly gregarious locust. There’s got to be something else.

We’re not quite sure what that something else is, but at least we know where it is. Probably. In larval insects, the moulting process is kicked off by an organ in the brain called the corpora cardiacum (CC). This organ stores a lot of different hormones, which do everything from telling the insect to burn fat to release 20-E from the ovaries. This organ produces and stores a lot of hormones involved with this sort of stuff, and one of those dozens might do something unique in males.

If you remove the CC from a male locust who is turning yellow, and inject it into one which isn’t turning yellow, it turns on the genes that produce the yellow coloration. If you pull a hormone called corazonin from this organ, and inject it into a nymph, the males turn into the standard gregarious coloration. CCs from females, injected into solitary males, seem to kick off some production of the proteins which cause the insects to become yellow…but not as yellow as normal.

In endocrinology, things get really complicated really quickly. Endocrinologists rarely study systems which rely on one hormone. Instead, things like this are controlled by cascades of hormone pathways which regulate each other. We’re typically interested in the stuff that’s at the end of the pathway, and like most paths in life, getting to the end is complicated.

I think there’s something to De Loof’s claims. It’s interesting that E and 20-E produce slightly different effects on yellowing, and that CC extracts from males and females have different effects on solitary males. It’s still not certain what this means, and it could still be possible that male locusts just react differently to the same hormones than females. It’s still possible that the receptors are different, and there aren’t any hormones unique to males. A lot of good biochemistry work needs to be done to sort this out.

It’s a great question, because there’s not an answer at this point in time. I think there’s evidence of male-specific sex hormone regulation…but this hasn’t really been looked into enough to determine whether males are just reacting differently to the same hormones or if they’re producing a different suite of hormones like humans do.