Which arthropod pets are good for beginners?

Your Name: Alex
Your Bug Question: Hello. I love my pets very dearly. Sadly I am going to college and cannot take them with me. I believe a tarantula would be the best option because I plan to bring it home with me on breaks and I already have a snake and fish so I don’t have much room to work with. I would definitely be handling the tarantula a lot. Do you recommend any specific species that is really laid back and easy to care for?

We’ve received a few questions from people who wish to keep arthropods as pets, but aren’t quite sure where to begin finding information.

This is really understandable, because arthropods can make really complicated pets. Some are quite difficult to keep for a number of reasons, there’s a lot of ethics involved, and there are even some legal issues to consider. Knowing where to start can be a really challenging proposition.

So if you want to get a tarantula, or another arthropod, here are some things to consider…

Buy captive bred if you can

This is the biggest ethical consideration when choosing an arthropod. There are a lot of species which have been collected from the wild that are sold in pet stores. In many cases, this has resulted in some amount of environmental destruction. As a consequence there are a lot of species in the pet trade which are protected under a treaty called CITES, which restricts the trade of endangered or vulnerable animals. 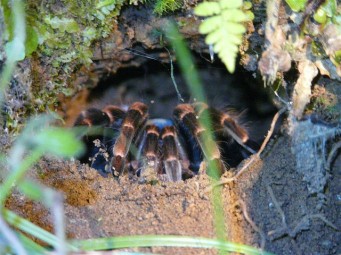 Brachypelma tarantulas are very common in the pet trade, and are highly prized because of their docile nature and ease of care. They live in burrows, and collection methods are very destructive. International trade of spiders from this genus is banned by CITES, and virtually all captive specimens of this species are captive bred. Photo credit: Sean Murray, via Flikr License info: CC BY-SA 2.0

While that sounds bad (and it is bad), people who keep arthropods genuinely love these animals. As a response to irresponsible collecting practices, the arthropod keeping community has begun breeding many species in captivity. Although many species are difficult to breed, most species of tarantulas and scorpions sold in the US have been bred in captivity.

A lot of people who sell arthropods are very concerned with the impacts of collection, as well.  Some collectors only collect limited numbers of individuals of certain native bugs every year for this reason. Unfortunately, I’m not aware of how this is handled among all suppliers.

Wild caught can be done in a responsible and sustainable manner, but it largely depends on who you buy from. This requires that you do some homework before you buy. If this is your first bug pet, it’s best to buy captive bred.

Understand the biology of your pet 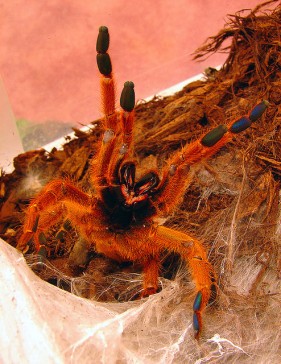 If your tarantula does this, it’s not asking for a hug. This is a threat display, and the spider WILL bite if you attempt to handle it. Image credit: Matt Reinbold, via Flikr. License info: CC BY SA 2.0

Arthropods are not like dogs or cats, and it’s generally a bad idea to handle them. They’re not social, so they don’t appreciate affection like a puppy. In fact, many arthropods show signs of stress when repeatedly handled or moved.

Other arthropods can be quite defensive, and will defend themselves from their owner because they think you’re a predator. Some tarantulas, especially those from Africa or Asia, will deliver a very nasty bite if you’re careless with cage maintenance. They won’t kill you, but some tarantulas can send you to the hospital. Some scorpions, including some sold in the hobby, can even kill you.

Don’t take it personally if you get an aggressive pet. There can be a really wide variation in terms of personality among arthropod pets. Within species, some can be really docile and others really aggressive. There’s no way to know for sure, but you always have to respect them for what they are.

Although they have been bred in captivity, they are still very much wild animals. Some can be handled, but they still deserve the same respect you would give an unfamiliar dog or cat.

Arthropod pets are typically easier to care for than mammal pets, but they do require specific environments. All arthropods grow by molting, and this can be a very dangerous time for these animals if the conditions aren’t right. If they stop eating for an extended period, that usually signifies an oncoming molt. An increase in humidity, accomplished by overflowing the water dish, is usually warranted during this period.

If you’re keeping these in an apartment, always respect the wishes of your landlords. They have the final say as to which pets you can keep, and you need to respect their wishes. You also need to follow the laws. There are some arthropods you can’t legally keep (discussed by Nancy here), and you shouldn’t try to seek those out.

We’re not going to pretend the illegal pet trade isn’t a thing, because it is. A  big part of ethical pet keeping involves not keeping potentially invasive species. We will not assist people in obtaining some of these illegal animals, such as phasmids or exotic beetles.

As well as asking for considerations about how to choose a pet, people have either asked us for suggestions or thrown suggestions our way. I didn’t really want to split this into two posts, so here are some of the animals we have suggested through email or internet forums. 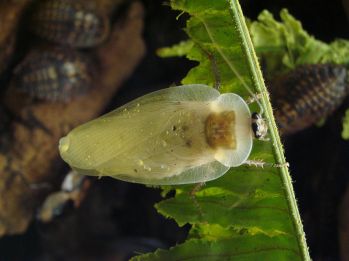 Cockroaches can be very beautiful, something we take great pride in pointing out on Facebook. Over time, however, they might become dangerous because their poop causes severe allergies. Image Credit: Guérin Nicolas, via Wikimedia Commons. License info: CC BY-SA 3.0

Cockroaches can make very good pets because they’re hardy, and can eat dog food. They’re also docile, which is great for kids.

Crickets are available almost anywhere, and are relatively cheap.

Crickets are very short-lived, usually only living for a few weeks. Like mealworms, they should be kept as a culture. Their care is quite a bit more difficult than that of mealworms and cockroaches, due to the need for cage maintenance.

Superworms, which are different than mealworms, live in wood as larvae. So they need to be isolated from their siblings before they can complete their lifecycle. Image credit: Evanherk, via Flikr. License info: CC BY-SA 3.0

Mealworms make good pets, because they’re hardy. Keep them in a bed of oats, and give them small amounts of fresh veggies for water. They require almost no maintenance, and you just have to replace the oats every so often.

The only cons are really a matter of taste. Some folks consider them boring because they’re common…but that’s in the eye of the beholder. They should also be kept in groups, sometimes called a ‘culture’, but some consider that a positive.

Care can be difficult for millipedes, because many species require moist environments. Moist environments can breed mold and mites, so regular cage cleanings are a must.

Some species in the pet hobby are caught in the wild, and some of these don’t do very well in captivity. The native species, like Narceus americanus tend to do pretty well.

Scorpions are popular pets, and most species fare quite well in captivity. Emperor scorpions (Pandinus sp), Flat Rock scorpions (Hadogenes), Forest scorpions (Heteromerus sp.), and the native Texas Bark Scorpions (Centuroides vittatus) do very well when kept properly. They eat crickets, which can be found at any pet store.

There are many species for sale which are not for beginners. Many of these scorpions are from the family Buthidae, which have tiny claws. Fat-tail scorpions (Androconoctus, Parabuthus) and Deathstalkers (Leirus) have venom which is capable of killing a person. One US species, Centuroides sculpaturus, has venom strong enough to require painkillers. They’re interesting animals, but they are not for beginners because there are a lot of precautions which need to be taken while caring for them.

Tarantulas are the quintessential arthropod pets. Most species are quite forgiving, although some really should only be kept by experienced breeders.

They’re divided into two groups. The first group, the New World tarantulas, are great for beginners. Spiders in the genera Grammostola, Brachypelma, Aphonopelma, and Avicularia are usually recommended due to easy care, a mild temperament, and a mild bite.

The second group, the Old-World spiders are not recommended for beginners. 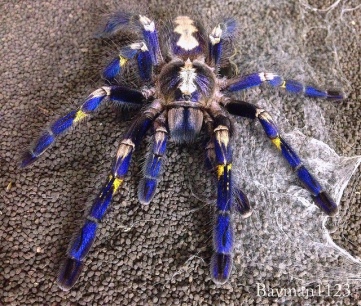 Poecilotheria metallica is probably one of the most beautiful spiders in the world, but it packs a nasty bite. It’s not a beginner species. The genus is from India, which makes it an Old-World species. Image credit: William Foster, via Flikr License info: CC BY-NC-ND 2.0

New World spiders tend to have irritating hairs, which they’ll kick off at the slightest provocation. These hairs are a primary line of defense, and irritate predators into not eating them. Sensitivity can build to these hairs, although they’re not as bad as cockroach frass.

Old World spiders come from Africa and Asia, and don’t have these irritating hairs. Instead, they defend themselves by biting their enemies. In the most severe cases, their venom can be strong enough to land you in the hospital. Fortunately, they aren’t capable of killing adults…but in some cases I do wonder about what a bite would do to small children.

Bess beetles are large, black beetles sold online through some dealers. You can see pictures here. They make good pets because they’re docile, long-lived and easy to care for. However, I caution people against buying them for pets because they’re social insects and the manner in which they’re harvested will destroy the entire colony.

Although I support their use in educational programs, I am extremely uncomfortable recommending them as pets.

This is not meant as a comprehensive post about caring for insect pets, and really doesn’t even reflect the full diversity of questions we’ve fielded in our inbox which relate to this topic. Every animal is different, and discussing care for every species would be impractical. Most of the questions we get about invertebrate pets also don’t translate well into blog posts, but we do answer them behind the scenes.

Invertebrate pets are widely available and a lot of people who keep these animals are passionate about their biology. There are several forums dedicated to keeping these animals, and the forum Arachnoboards* is one I consider the best place for the newer keeper to get started. They have both a website and a Facebook page.

If you’re interested in a particular species of invertebrate pet, we can field questions about them. I’ve kept quite a few bugs in my day, and can discuss basic care or direct you to caresheets and similar information online. However, getting in contact with other people who share this interest through the internet is another way to find out about this hobby as well.

*Joe is a member of Arachnoboards, but does not post there anymore since he no longer keeps invertebrate pets. Arachnoboards is not affiliated with AaE in any way.

3 Responses to Which arthropod pets are good for beginners?