When a Spider Loses a Leg, Does Its Whole Hydraulic System Lose Pressure?

@BugQuestions whenever a spider loses a leg, does its whole hydraulic system loses pressure as well? My ghost spider lost a leg and froze.

This question came to us from Twitter, from user Katzider. It’s an excellent question for many reasons, not the least of which is because it’s about pet spiders. During our podcast with Mythwits, I expressed a little annoyance at the fact that there’s very little medical care for invertebrate pets and livestock. There are some very good economic reasons for this, but ultimately spider keepers are kind of on their own when it comes for veterinary care. Since spiders are popular pets, I think the questions Katzider sent to us are a great set of questions to focus on this week.

Before we jump into the meat of his question, we have to describe how spiders move and respond to injury. After that we’ll explain how a loss of fluid would affect movement, and discuss what precautions can be taken to save injured spiders.

For that last part, we’ll get to meet a brave little spider named Bob. But first…

How do spiders move?

Spider movement is extremely unusual amongst arthropods because it involves both the circulatory system and muscles. To extend legs, blood (or hemolymph, to be technical) is pumped into the legs which causes them to expand outwards. Bringing the legs in is caused by contractions of the muscles, which pushes blood back into the body cavity, and the process can start over again. There’s a great animation by the BBC which shows how this process works.

What happens when spiders hurt themselves?

When spiders lose legs, they typically lose them at predetermined ‘break points’…usually at a joint close to the body. These points have special muscles which clamp shut, to ensure the spider doesn’t lose too much blood. This process is called ‘autotomy’, and it’s completely normal. After all, you’d much rather lose a leg than a life.

To a spider, losing a leg isn’t a very big deal. Heck, some even voluntarily castrate themselves. Overall, there’s a slight lag in development time. Being short a leg or two (or six) is going to slow you down a bit, which makes prey harder to catch. So long as you’re able to catch prey, you’ll be able to recoup the resources you’ll need to regrow that leg. Easy-peasy. 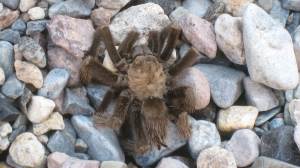 However…what happens if the leg is amputated before the break-point?

Well, the spider ends up losing a lot more blood before they’re able to eject the leg. When a spider loses too much blood, it has trouble moving. Often, injuries can remove so much blood that the spider goes into a stereotypical pose called a ‘death curl’ when things get really bad. Since extension of the leg is caused by an increase in blood pressure to the limb, the death curl is what happens when the spider’s blood pressure gets too low for it to extend the limbs.

In other words, if your spider looks like it’s going into a death curl…are really bad.

What can a spider owner do if your pet goes into a death curl?

Here’s where we meet Bob the Disabled Tarantula.

Bob the Disabled Tarantula is a Facebook page dedicated to one particular spider who lost their legs in an accident while escaping from their enclosure. It was caught on some sticky paper used to catch ants, initially losing six legs and dropping the seventh at a later point. 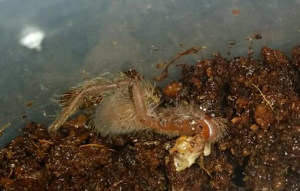 This is what a spider having a bad day looks like. Then again, it has a cricket…so things might be looking up.
Pictures courtesy of the Bob the Tarantula Facebook page, used with permission. 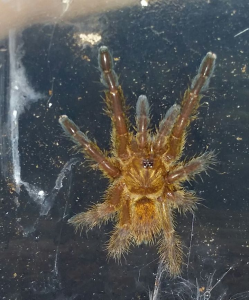 This is the same spider as above, after the next molt. The legs have grown back, and all are the same size.

In pictures taken over a year later, there’s no trace of what happened.

Bob’s owner did everything right in terms of medical care. The spider was placed in a clean container, with increased humidity and access to water. This allowed Bob to re-claim the water lost from the injury, and reduce any further damage caused by dehydration.

The injury obviously made it more difficult for the spider to capture prey…but spiders are pretty tough. Because Bob was able to eat, Bob was able to recover and live a normal spider life.

If you want to make your own tarantula ICU, this video is a great explanation of how this process works:

If a spider is injured, it’s possible it will have trouble moving because of the hemolymph loss. This loss of hemolymph causes some locomotor issues because of the unique way that tarantulas move. However, if care is taken then the spider can recover from some pretty grievous injuries.

4 Responses to When a Spider Loses a Leg, Does Its Whole Hydraulic System Lose Pressure?