The perfect April Fool’s day post: What’s going on in this video?

In our email on Monday, we received a message from Mike Menefee with a link to this video:

I witnessed (and videoed) an interesting interaction today between a wasp and a fly.  They seemed to be working together in some fashion.  Here is a link to the video (only a 46 seconds long).  Can you help me identify the relationship… what is going on here?

The video shows a particularly interesting sort of parasitism, one which I think is perfect for a post appearing on April 1st. That fly is a special kind of parasite. Instead of burrowing into the wasp’s larvae, it steals the food the wasp is provisioning for it’s babies. This relationship is known as kleptoparasitism.

So, today’s post is going to focus on this very special form of trickery. In particular, I’m going to talk about:

Cuckoo birds are the most famous kleptoparasites. Picture courtesy of Per Herald Olsen via Wikimedia commons. Image License: CC by-SA 3.0.

The term is based on the word kleptomania, which refers to someone who has an uncontrollable impulse to steal. Kleptoparasites make a living by stealing food or other resources from other animals. This sort of relationship is actually pretty well known in other animals. In birds, this is known as ‘brood parasitism’. Cuckoos are probably the best known animals which do this, because they’re very adept at tricking other species into caring for their young.

This sort of relationship has even made it into popular culture. In the How to Train your Dragon mythology, the dragons start out as adorable kleptoparasites of older dragons. They begin their lives by stealing food from older and more powerful dragons, transitioning into a more predatory niche as they grow.

The relationship between this fly and wasp isn’t much different, because the fly makes a living in a very similar manner.

What sort of relationship do this fly and wasp have?

Positive and undeniable ID from pictures on the internet is very tricky, mostly because a definitive ID requires some very obscure features which are difficult to see without a microscope. However there are some behaviors which can make an ID a lot easier, and the behaviors I see displayed in this video are pretty unique to two particular groups of insects. So keep in mind that my IDs are tentative, and remember that I welcome discussion in the comments. 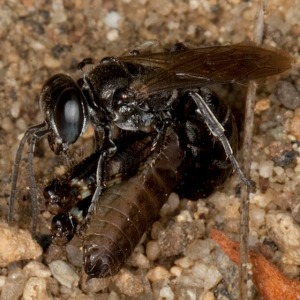 Tachysphex female, with her grasshopper prey. This species is one of thousands of potential candidates for the wasp in the video. Photo courtesy of Steve Nanz, from Bugguide.net. Image license: CC by-ND-NC 1.0

There aren’t a whole lot of large wasps which dig holes, and the one in the video most closely resembles wasps in the families Sphecidae or Crabronidae…both of which are very closely related to bees. Unfortunately, without a clearer shot I can’t get more specific than this speculation.

Generally, Crabronid and Sphecid wasps dig holes in the ground and then go out to find insects. They paralyze their prey using venom, and then bury them. The mother wasp then lays her eggs on the insects she captures, and her larvae eat the prey their mother provides for them.

This sort of behavior is known as ‘provisioning’, and kleptoparasites cue right in on this. They’re good at finding burrows, nests or other resource sinks collected by other insects and stealing them for their own purposes.

The behavior of the fly in the video is very distinct. She tracks the wasp, and never lets her out of her sight. She stays a certain distance away from the wasp, never approaching closely but never lagging far behind.

This stalking behavior, as well as the fly’s coloration, is unique to a group of Sarcophagid flies called the Miltogramminae. Their habit of ‘orbiting’ their hosts has given them the nickname of ‘satellite flies’. Unfortunately flies in general are extremely difficult to ID, and this group of flies is particularly difficult…even with an actual specimen available.

This group of flies has a rather interesting way of reproducing. Unlike most insects, they don’t lay eggs. Instead of eggs, they lay young larvae which immediately begin feeding. This puts them at an advantage over the wasp eggs, which must incubate a few days to a few weeks before they hatch.

What’s happening in the video?

The fly is stalking the wasp, and then enters her burrow to deposit her larvae. This group of flies has a lot of different ways to do this. The species in the video waits for the mother to leave, and then sneaks in and deposits larvae on the food stores it witnessed the mother bringing. Other species in this family will actually hitch-hike on the mother, or even lay larvae on the prey before the mother can detect them.

How do kleptoparasites adapt to this lifestyle?

The Miltogramminae are pretty basic kleptoparasites. They’re part of a family of flies called the Sarcophagidae. Most Sarcophagids are scavengers, but many other groups have jumped to parasitism from feeding on corpses. The feeding habits of the Miltogramminae subgroup really aren’t that different from that of their scavenging ancestors. That doesn’t mean that some kleptoparasites aren’t well adapted, though.

One of my favorite fly families is the so-called ‘freeloader flies’, the Milichiidae. These flies specialize on eating the prey of certain predators while they’re feeding, and different members of this family actually appear to specialize on stealing the prey of specific host spiders. Some even specialize on assassin bugs. Some are highly adapted to finding their hosts while they’re feeding, and taking advantage of that oddly specific situation. Others will hitch-hike on their hosts, and wait until their host captures another unfortunate insect.

The most specialized kleptoparasites are actually butterflies in the family Lycanaeidae. These butterflies don’t look like much, most are small and blue, but they are extremely well adapted to the grifter lifestyle. Their larvae mimic the smell of ant larvae, and after bribing the ants with a specialized gland, get adopted into the nest. Once inside, they mimic the sound of the queen ant to gain special treatment over the ant’s own larvae.

This just goes to show…everything around you has a backstory which is very interesting. You can learn a lot from just watching animals, and sometimes you can find some really neat stuff if you keep your eyes open!