I love this project because sometimes we get completely  random but interesting questions. Like where Mantis Kung Fu came from. Turns out there’s two distinct styles and many sub styles within them, so the answer is a bit complicated.

So let’s start off with why they can turn their heads around.

Lots of insects, including flies, mantises, and dragonflies, are practically living bobble head figurines. Here’s a nice video of a dragonfly grooming its head where at one point, turns it completely upside down.

There are a lot of muscles in there that help give the insect its flexibility, but why is this necessary? The insects that can twist their heads around like this are very visual animals. In the case of mantises and dragonflies, they’re exceptional predators that rely on their sight. Many flies, including robber flies, are also predatory. House flies and others aren’t predators but do use their vision for finding mates and locating food sources. In any case, they’re all really visual and need to see the world around them. 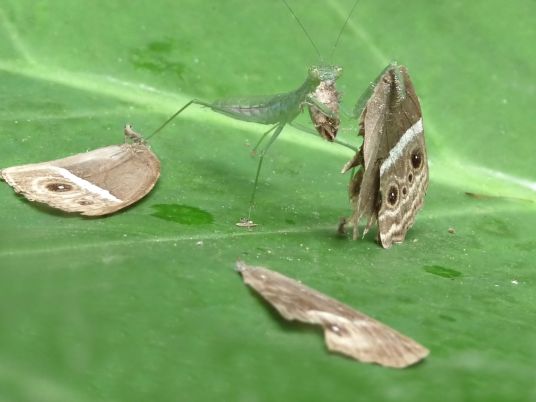 This can be difficult when your eyes are stuck on the side of their head. Insects can’t move their “eyeballs” around like we can. Some insects, to compensate, just made bigger eyes. Others, like the ones we’re talking about, made bigger eyes and can move their head around like they belong in The Exorcist. If your eyes encompass half your head or more, and you can turn your head upside-down, you can see almost 360 degrees. This helps you catch prey, find mates, and avoid being eaten. This is the same reason owls can turn their head so far around. They can’t move their eyeballs and seeing more than just directly in front of you is generally good for surviving.

I can’t move my eyeballs, so I just have to move my head instead.
Photo Credit: MaterialScientist (CC by SA 2.0)

Mantises are known for their quick, accurate (usually), and deadly strikes and this inspired a form of Kung  Fu. In the following video you can see a slow-mo of mantis strikes and a person imitating a mantis strike to blow out a candle.

First things first – there are two Mantis styles and they are not related to each other.

The Southern Praying Mantis Style is more akin to “street fighting” with its close range attacks that include both punches and kicks. It is considered to be native to the Hakka people, but was developed after the Northern Style. The history pertaining to the Southern style isn’t well known. There are many types of Southern Mantis Kung Fu: five  are common and only one of them is called the Praying Mantis Style. Furthermore, its naming is controversial. While some of their positions look similar to that of the praying mantis arms, only the Northern Praying mantis style actually has moves named after mantises and their strikes. However, the Southern Style is still considered to be inspired by the insect. Southern Praying Mantis Kung Fu is considered to be more gentle and smooth than its Northern counterpart.

The video below starts at a description of the Southern Praying Mantis Style.

This is the same video as above, but marked at the description of the Northern Style.

The history of the Northern Style is complicated because there are a lot of different legends. At least all of them agree that a guy named Wang Lang  started it. After that there are significant disparities. As I can’t read Chinese to read the actual history (whether or not it exists), I have to rely on translated versions.

Wang Lang lived during the Ming Dynasty (probably) and initially learned a different version of martial arts from a master. Some legends state that he couldn’t beat his superior. Others say that his superior died and he couldn’t defeat his brother in the monastery. Others say that Wang Lang was in a fighting competition and lost. Others say that he was a master invited to improve older versions of kung fu along with seventeen other masters after honing his skills, however many of the masters in this particular legend are fictional people.

The versions that Wang Lang fought and lost are a bit more interesting from a story telling perspective, because of character development and the fact that they consist of more than “He and some other dudes made a new thing”.  In these legends, Lang Wang left the arena or the temple and witnessed a praying mantis. Some legends say that he watched a mantis capture a cicada, other insects, or attacked the wheels of a cart. Regardless, Wang Lang was inspired by the insect’s agility, power, and persistance,  and studied it over the course of several years.

He created twelve strikes based on the attacks of the mantis; kou (hook), lou (grasp), t’sai (strike), kwa (upward block), tiao (hook), chin (advance), peng (recede), ta (strike first), chan (contact), nien (cling), tieh (tag), and k’ao (lean). He then decided he needed some fancy footwork and studied the monkeys of China, or borrowed heavily from this other form of Kung Fu.

After training on his own, Wang Lang went on to best his superiors and continued teaching this new version of Praying Mantis Kung Fu and was subsequently passed down from masters to students.

But you can just listen to one of the legends for yourself.

Ecologically speaking, if you need to see to survive well and your eyes don’t move, you have to be able to turn your head to compensate. There are two distinct and unrelated styles of Kung Fu; the Southern and the Northern each with their own subsets. Generally the Southern style is more like street fighting incorporating low kicks into the art. The Northern styles are faster and specific strikes are name for the mantis. Both have positions that appear to be inspired by the praying mantis.