The other day I received an email from a former student about the persistence and strength demonstrated by praying mantises. 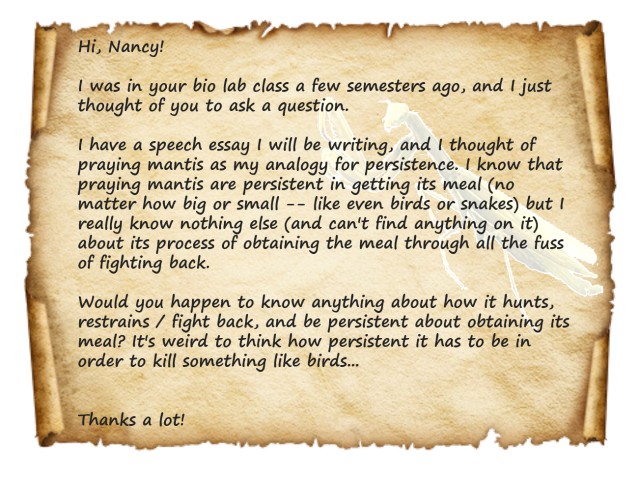 Yes, she did say birds. It is pretty amazing when you think about how mantises can capture hummingbirds! Praying mantises have a couple adaptations that make them such amazing predators. The first is their ecology, the second is morphology, and the third is biomechanics.

Mantises are ambush predators. This means they wait in stealth like a ninja until something passes by that strikes their fancy. Then, with lightning fast speed, they reach out and snatch up their prey.

This behavior works because they’re, in general, very well camouflaged. There are some that look like sticks, dead leaves, live leaves, and even ants! The orchid mantis looks like a flower, but instead of camouflage, it actively lures prey to it. It’s a tough gig being an insect that thinks it’s going to get some tasty nectar and instead gets slurped up by the orchid mantis.

This Bark Mantis is just standing by, and when the time is right, will run down it’s prey.
PC: Vipin Baliga (CC by SA 2.0)

Regardless if the mantis lures prey in, waits for something to happen by, or wants the whole world to see it, the strategy is the same. Sit. Wait.  (Optional: Run  down prey). Use death arms.

Exoskeletons are great. They’re strong, fairly light, and much better than an endoskeleton (what we have) for muscle leverage. Exoskeletons have little indents which are used for muscle connections. These indents are both more abundant and more conveniently placed for muscle attachment than how humans are wired and this gives mantises better leverage. Therefore, they need less force to move their muscles than we do.

The muscles are also connected to the joint in an advantageous manner. To avoid sentences with words that are equally difficult to pronounce as they are long, basically everything in the mantis is done with an efficient spring-loaded system. While mantises themselves haven’t been studied extensively, other organisms with legs like mantises (raptorial) have been and the underlying idea is the same. At rest, the arms store a lot of potential energy. When they want to catch their prey, the mechanism is released, like letting go of a spring, and they nab their prey with lighting quick speed. The system is very efficient and a lot more force (sometimes upwards to 2x the force) than went into moving the muscles is released when the animal strikes.

An extensively studied organism with such a mechanism is the mantis shrimp (No relation. Really, he doesn’t know you at all.) To give you a general idea how raptorial legs works, the video below shows how this spring loaded system works in the mantis shrimp, and it’s very well explained in this article.

Once the mantis has struck its foe, the large spiky arms of the mantis help keep its prey solidly lodged in its death grip. It’s like a bear hug, except instead of just feeling like the life is getting squeezed out of you, it is. And you’re being eaten. Mantises aren’t the only animals to employ this strategy to keep control over wriggling prey. Giant squids have rotating hooks and birds have projections on the inside of their mouth to help keep things down. Anyway, giant death spikes are a good way to keep your prey from wriggling free. Who’d have thought.

Mantises are masters of mimicry and use it to hide from their prey, lure their prey to them, or find a good hiding spot before chasing their prey down. Their behavior and ecology make them excellent predators. Once they strike, they pack a powerful punch with their spring loaded spiky doom legs which dig into the prey, making escape impossible.

In the video below, a mantis owns a humming bird. Don’t watch if you don’t like watching those kinds of things.