Are there invasive insects from North America? The political consequences of our invasive species.

This question about invasive species caught my eye, mostly because I’m not sure I can give a complete response.

Reading abt Asian citrus psyllid. Are there many N. Amer. insects considered pests/invasive on other continents?

A lot of the insects I deal with are agricultural pests, and most of our agricultural pests have come from other parts of the world because of shipping activities. A lot of invasive species, however, have also come from America as well. Fall Armyworm, native to North and South America, has started cutting large and destructive swaths across Africa after it was introduced. Western Corn Rootworm, a billion-dollar pest, has been introduced to Europe and threatens agricultural supplies there as well.

Unfortunately, I’m just not familiar enough with this topic to give a super complete list…but I do want to talk about this topic because I want to highlight not only the economic ramifications but also the political ramifications that introduced species have. Instead of giving a complete list of North American introduced species, I’m going to focus on the one I believe to be the most important…not only economically but politically.

The pest species is the Colorado Potato Beetle, and it’s probably the best documented invasive species from North America. It’s expanded it’s population from Mexico, into North America, and has spread across the world over the past 150 years. It’s extremely hard to kill, and because of this, it’s played a prominent role in every major world conflict since WWI.

This is a long story, but it’s one of my favorites. This is a story that starts in Mexico in the 1800s, and ends in with the conflict happening today in Ukeraine.

The American History of the Colorado Potato Beetle 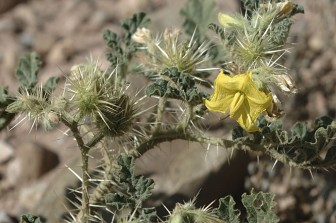 Another aspect of CPB biology that’s really important is it’s diet. CPB specializes on plants in the nightshade family, which are some of the most toxic plants known. Many of these plants, including the ones we eat, produce some rather potent toxins that this beetle has had to evolve to detoxify. It’s a really important pest of potatoes, but can subsist on closely related plants if it needs to.

These two characteristics, the ability to thrive in cold climates and the ability to detoxify various compounds, are what this beetle has used to become one of the most damaging pests in the world.

CPB is one of the most economically damaging pests in North America, and is pretty much responsible for the modern pesticide industry. 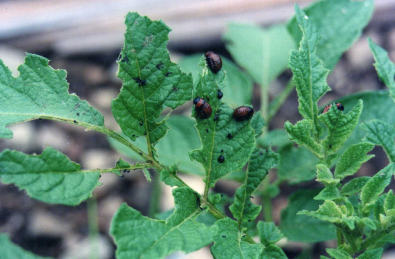 Although potatoes were introduced into the US in the 1600s, CPB didn’t become a pest until the mid-1800s. It was found in the range, but it just didn’t make the jump to potatoes for nearly 200 years. At some point, there was a host-shift which allowed CPB to attack potatoes. Once it made that jump, however, this new host allowed it to conquer the US. It moved from Nebraska to California in just 20 years.

Biological controls weren’t particularly effective, and it staggered generations to make crop rotations hard to use. It was good at finding farm fields, except the most isolated ones. Manual and horse-driven CPB crushers came into use, but these were only marginally effective. Pesticides were the most practical option.

The first widely use pesticide, an arsenic-based dye called Paris Green, was discovered because of CPB. Arsenic based pesticides were used until 1940, when they were replaced with DDT because of cost and health concerns. What follows is an incredible rate of evolution of this pest, to further adapt to agricultural environments. 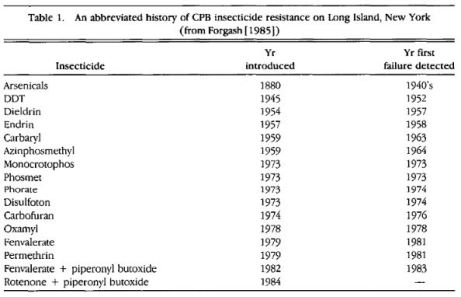 An incomplete list of pesticides CPB has become resistant to over the years. The paper this figure was taken from was published in 1987, and the beetle has continued to evolve resistance to nearly every type of pesticide that’s been used against it.

DDT was introduced to fight CPB in 1945 (two years before it was used to fight malaria in the US), and developed resistance in just 8 years.  By 1955 the entire pesticide class that DDT belonged to was no longer considered effective, as were the arsenic-based pesticides. It evolved resistance to the first organophosphates and carbamates in just 4 years. The first pyrethroids were only used 2 years before it developed resistance.

The remarkable thing about CPB is that it’s left agricultural scientists in a Red Queen situation. We can control it most of the time, but just barely. It was only in the past 20 years that we begun to understand the need for resistance management, and it was CPB that helped bring that about. Entomologists vastly underestimated how adaptable this pest was. In fact, scientists even wrote papers with titles like this:

Actual paper title, which I cited below. This is literally the scientific community saying ‘We messed up for well over a century’.

The story of CPB outside the US is one of globalization and war. The beetle briefly made it into Europe in the 1800s, but was pretty quickly eliminated. In the 1920s, the beetle finally established in France.

After it established in France, the buildup to WWII and WWII itself allowed it to spread rapidly. In wartime, there’s a lot of vehicles which are trying to get places very quickly…and quarantine procedures aren’t super important. This combination allowed the beetles to spread rapidly in the wartime environment.

There’s speculation that CPB was used as a biological weapon in WWII because potatoes were an important wartime staple. The idea was that CPB would cause the countries at war to burn more resources to produce food. Research designed to turn this insect into a weapon was certainly done by both sides, but it’s natural spread most likely rendered this unnecessary.

During WWII, there was a lot of research into chemical warfare by both the Allied and Axis powers. Although this was supposedly to develop new weapons, much of it was out of fear of the Colorado Potato Beetle. The first organophosphates, nerve gasses turned pesticides, were invented while looking for new ways to fight the CPB in preparation for such an event.

It wasn’t until the Cold War, however, that the CPB really came into it’s own as a propaganda tool. The rumors it was a biological weapon, combined with the fact that it was an American introduction, made it useful as propaganda in the Soviet controlled states during the Cold War.

As time has gone on, the symbolism of CPB as an invader has stuck around. In modern day Ukraine, Russian Separatists wear gold and yellow striped ribbons to show their support for the Russian government. The fact these ribbons look kind of like a Colorado Potato Beetle with its wings spread hasn’t been lost on the anti-Kremlin forces. It’s now used as a symbol of resistance, and Russian soldiers are even referred to as Kolorady…similar to how we may use the term cockroach.

America has accidentally introduced some rather destructive insects to the rest of the world, entirely by accident. These introductions have consequences, not only economic but also political, for real human beings.

The saga of the Colorado Potato Beetle is one that was facilitated by biological evolution. The beetle had to evolve to adapt to a colder climate, evolve to eat potatoes, and then evolve resistance to pesticides. Once it accomplished this, it changed the agricultural and geopolitical landscape.

By evolving so quickly, it became a widely feared pest. Because it was so feared, it inspired a lot of chemical warfare research. It also became a particularly useful propaganda tool during WWII, during the Cold War, and in the post-cold war era that we’re living in today.

We have introduced insects to other countries, and that has resulted in stories that are just as compelling as this one. Unfortunately, the Colorado Potato Beetle’s journey across the world is the best documented.

1 Response to Are there invasive insects from North America? The political consequences of our invasive species.