Why Do Bugs Circle Lights and Fibonacci, and Other Mathematical Patterns Found in Insects

I recently received this question when talking to one of the tourists at the Maquipucuna Ecolodge, where I work. I thought it was so interesting because we always hear about mathematical patterns – especially Fibonacci sequences found in leaves and shells – but what about the animal kingdom? So can you find any mathematical patterns in insects? Yes  –  but it’s not as apparent.

From a mathematical and engineering perspective – hexagons are one of the best shapes for construction. It uses less material than other shapes while still retaining its strength, and is one of the most efficient uses of space. Circles are also incredibly strong shapes, but you can’t easily join circles together without wasted space in between. Hexagons nicely line up.

In fact – we use hexagons in bridge and airplane designs. You can use a lighter material and make it withstand more force by using hexagonal shapes.

Hexagons show up in a number of places in relation to insects. The most notable example is honeycombs – the waxy structures honey bees make to hold their honey. You probably don’t think about how much honey honey bees actually store. A typical hive can typically store 100 pounds (50 kilos) of honey and up to 300-500 pounds!! (150-250 kilos) And you need a super strong  and efficient structure to hold all of that weight. 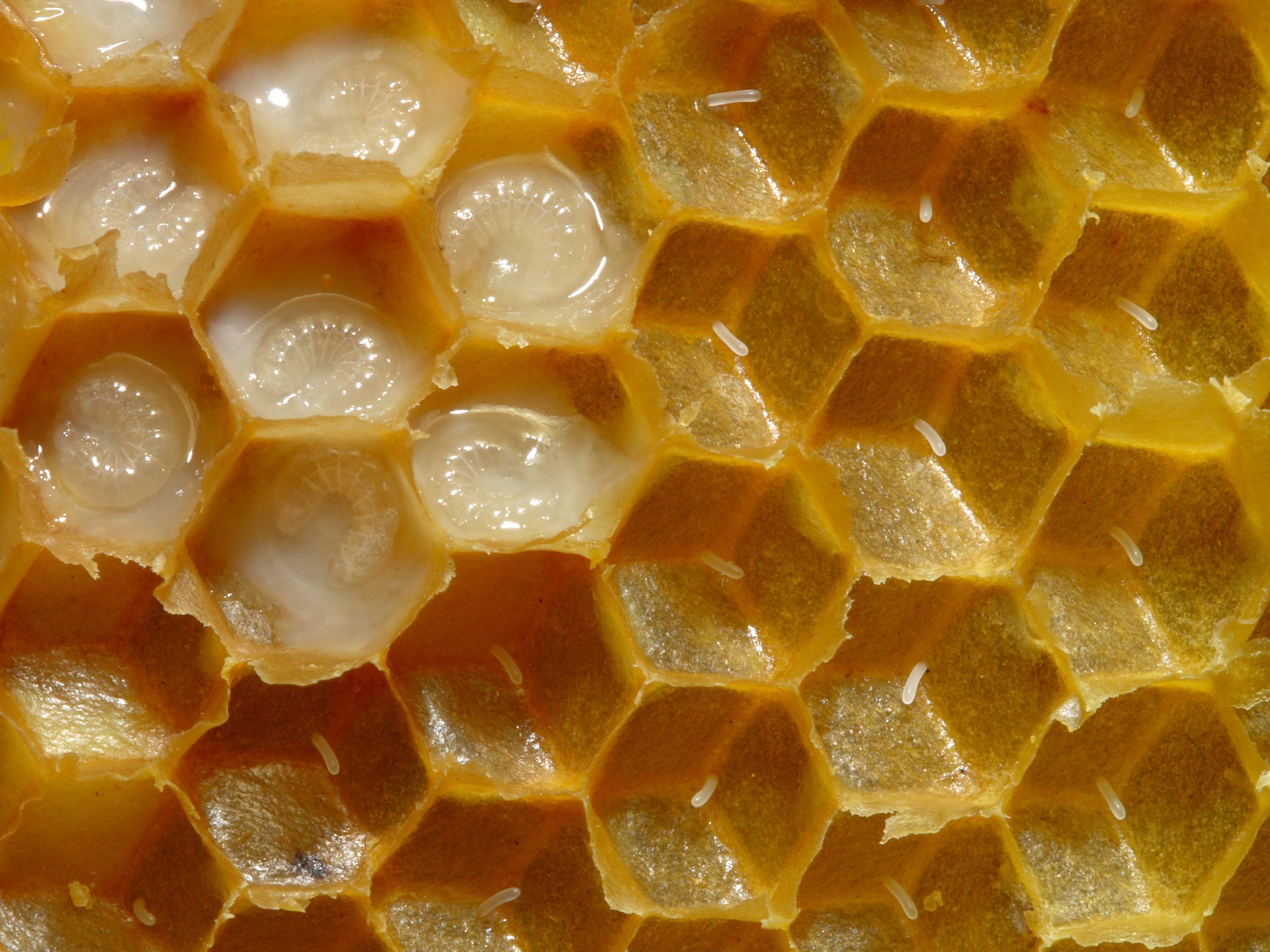 And you know, you need to store eggs and babies too.
PC: Waugsberg (CC by SA 3.0)

Many insect eggs also sport hexagonal shaped patterns for the same reasons.  You need to build a structurally sound dome but don’t want to waste a ton of resources. Especially if you’re one of those insects that puts out 300 eggs at a time.

A quick google search brings up a lot of insect eggs! Many of which have hexagonal patterns

There’s more here than just what meets the eye (sorry not sorry).
Compound eyes, generally, are built out of hexagonal lenses called ommatidia. We think that they’re hexagonal for all of the aforementioned reasons, but for a couple other reasons as well. Mainly, hexagons have a shallow angle where two sides meet – so you need less material (exoskeleton or otherwise) to reinforce the larger structure you’re building. And as I’ve mentioned before, insect eyes are not that efficient. The only way to see better, is to make a bigger structure.

Hexagons have the most efficient packing schemes maximizing the number of close neighbors. They also have the maximum rotational and reflection symmetries. All of this efficiency streamlining is really important when creating motion and edge detectors.

Speaking of eyes and light detectors …

where the the next number in the sequence is the sum of the two numbers preceding it. Graphically, it looks like this.

Looks like pretty much every shell you’ve ever found on the beach, huh? Also, curled up elephant trunks

The spirals that result from this pattern is found in all sorts of places in nature including elephant trunk spirals, nautilus shells, the way ferns unfurl – even the way your ears are shaped. Vihart has a great video series explaining why we see this ratio specifically in plants, which I highly recommend you watch.

The Fibonacci sequence is not as easily seen in insects. In fact, about the only convincing example I found of it – is how moths and flies are attracted to lights. Back in the day before pesky humans and their artificial lights – insects only used the moon and the sun to try and navigate.

Give us your best moth lamp meme.

Since insects have the hexagonal lenses, they orient themselves to the light so that it always enters the same group of lenses at a right angle. Therefore they maintain a constant flight trajectory at a constant angle.

If you have a light source that can be reached (unlike the moon), the insect still maintains the same angle orientation to the light, but to do so it changes its flight path from a straight line (useful for navigation) to a spiral (not so useful for navigation). The spiral produced is that of the Fibonacci sequence.

This of course assumes that you’re on a flat plane.  You can start modeling insets attracted to light in three dimensions. The first figure in the following sequence is most commonly exhibited by flies. You can start changing the predicted flight pattern by changing the angle (α) at which the insect is maintaining itself to the light source.

Notice how all the flight patterns are conical once you model them in a 3D space.
PC: Boyadzhiev (1999)

We’ve apparently written about cicadas quite a few times in our time here at Ask an Entomologist and they’re going to show up again.

There periodical cicadas emerge every 13 or 17 years depending on the species. So once an egg is placed in the ground, it will develop into a nymph and suck plant sap for 13 or 17 years (depending on what species it is). That means, I was a baby, learned how walk, sing, horseback ride, had my first date, got dumped by my first boyfriend, almost failed geometry, got my first car, and graduated high school, and got into college in the time that one 17 year cicada just chilled on a tree’s roots sucking sap all day, every day.   We’re not really sure why some have such long developmental periods, but now we think we’re starting to understand why they emerge in primes. 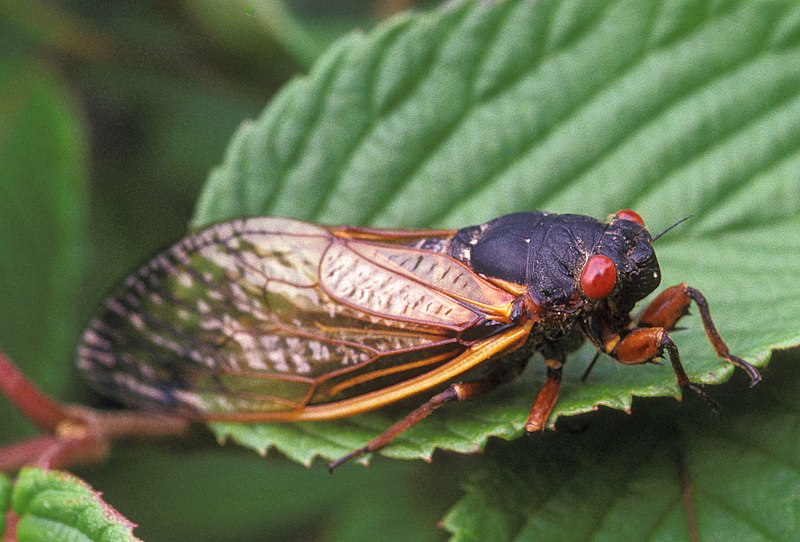 Prime numbers aren’t divisible by anything (except for 1 and themselves). So if you emerge every 13 years for example, and your predator emerges every 4, 6, or 8 years, you’re unlikely to overlap. And for an insect who’s adult life span consists of mating and laying eggs for about 3 weeks, avoiding your predators is a good thing even if that means you have to chill underground for a while.

Mathematical patterns aren’t as easy to find in insects as they are in plants and some other animals, but that doesn’t mean they’re not there. Maybe next time you see a honey comb, or a piece of architecture with hexagons you’ll have a new found appreciation for them. Or if you find a helpless insect buzzing outside your porch light, you’ll feel a little sorry that evolution didn’t prepare them for light sources that aren’t outside of our atmosphere.

But you know, the entomologists like it =)
PC: Nancy Miorelli

Nancy Miorelli, @SciBugs, is living in the Ecuadorian Cloud Forest in the Maquipucuna Reserve.
To help fund her stay she sells eco-friendly, bug jewelry featuring jewel beetle shells and an Ecuadorian nut called Tagua! Spirals are important are not only naturally important, they’re culturally important too!
Check out her shop SciBugsCollections!