Interacting With Ekbom’s sufferers: Guidelines from the dermatology literature.

Infestations can be very difficult to handle in online science outreach projects. We do our best to give the best possible advice, but ultimately it’s an issue where you need boots on the ground.

During our infestation post, we mentioned that there were mental illnesses which made people believe they’re infested with parasites. Even with boots on the ground, this line can be hard to draw. People who have had real infestations, like the one below, often exhibit a hyper-vigilance which keeps them repeatedly checking for insects for years to come.

The former case is willing (and often relieved) to discover their infestation has not returned. The latter case is unwilling to accept that they are not infested, and will often become angry or confrontational when given the “all clear” from a doctor or an entomologist.

That latter case, where people are unwilling to accept they do not have an infestation, is a legitimate mental illness called Ekbom syndrome by entomologists. It’s something which is very commonly encountered by insect scientists. Despite that, we do not receive training on how to handle this sort of psychological issue during our education.

So to better educate myself how to properly handle this, I wanted to write a post on here which revolves around how people in the medical profession recognize and ultimately handle this condition.

Trigger warning: This post discusses psychiatric disorders and will describe some forms of self-harm. We will not post anything gory below the fold, but we will discuss topics which may disturb some readers. Due to the sensitive and uncertain nature of this topic, we have opted not to post any of the queries which prompted this post.

What is Ekbom syndrome? 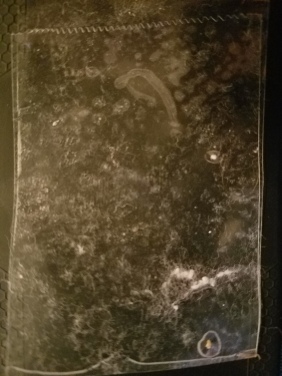 An example of what you may receive as a specimen sign. This one was simulated by Joe Ballenger, and does not contain any parasites.

The medical literature refers to Ekbom syndrome by several names, including delusory parasitosis, delusional infestation, and Morgellon’s. This condition is usually treated as a subset of hypochondria or body dysmorphic disorder, and the two main symptoms are typically listed as follows:

It’s important to note that these people often have genuine sensations in the skin which resemble crawling or pricking from insects. In some cases sufferers will also see parasites, even when they’re not seen by an independent observer.

Based on my experiences, I’d like to add a few things to this definition which may help people recognize this condition:

This combination of symptoms makes these cases extremely difficult to handle. The name favored by medical professionals, delusory parasitosis, actually makes these patients reject medical help because they feel attacked by the term ‘delusional’. As a result I favor the term Ekbom syndrome, which has less judgemental implications.

Regardless of semantics their concern over parasites is ultimately psychiatric, and entomologists really aren’t in a position to help because we’re not qualified to diagnose this condition. In some cases, I’ve seen pest control professionals attempt to walk people who display many symptoms of the list above through self-treatment of the home with pesticides. Ekbom sufferers have a tendency to misuse pesticides, so treatment advice can further endanger their health. 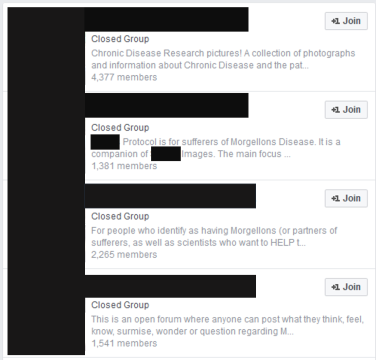 Typical examples of Morgellons support groups, with identifying information censored. These groups can be somewhat large, very active, and are usually very secretive about their members. Many will present themselves as amateur researchers. Identifying information has been blacked out to respect that secrecy, and to discourage people from joining such groups.

Although Ekbom syndrome is described as rare by the medical literature, people who suffer from this condition will often seek out entomologists for help. It’s not uncommon to see this condition in insect identification groups, or when working in extension.

In addition to this, there are a lot of online ‘support’ groups which have sprung up around this illness. The term Morgellons, commonly used by these groups, is generally accepted to be a form of Ekbom’s syndrome. This sort of internet phenomena creates a type of cultural identify for people that suffer from Ekbom, and allows them to maintain their beliefs of infestation.

There are also a host of small pharmaceutical companies which market products to Ekbom sufferers, sometimes using loopholes that exempt supplements and homeopathic products from the sorts of testing the FDA uses to ensure that larger drug companies sell safe and effective products.

Although some of the medical literature says the condition is rare, it’s common enough to have an entire culture and economy which revolves around it.

What Can You Do?

As an entomologist, you should never attempt to diagnose someone, because you are not a doctor. I also believe that we shouldn’t be walking people through home treatments online, because that opens up a whole host of liability issues. However, we also must recognize that we’re in a position where we encounter legitimate medical conditions which include mental illness.

Interactions are key to convincing these people to seek help, and they have to be done a certain way. In order to handle these cases more effectively, I reached out to some dermatologists to ask for advice on how to handle these interactions in practice. I was fortunate enough to hear back from some of them, who were kind enough to send me their clinical guidelines on patient interactions. I felt some of these would be useful to other outreach specialists, and have paraphrased them below.

When helping these people out, it’s important to remember that the biggest challenge is getting them to accept medical help of any kind. Developing a trusting relationship is key to getting them help, although this is not easily balanced with the challenge of maintaining professionalism.

It’s also important to note that an entomologist cannot definitively diagnose Ekbom’s, or prescribe helpful medications. They must ultimately be treated by a dermatologist or other medical professional.

The key to helping people who suffer from Ekbom’s is to get them to a medical professional, and there is a very specific way dermatologists interact with these people which increases their chances of accepting the proper kind of help. As with SciComm, effective interactions are key to convincing them to accept help.

Describing the sorts of interactions dermatologists use to convince these people to seek the right specialist is a complicated affair, because they interact with these people in a medical context whereas we do not. However, I think that understanding these interactions may put us in a better position to help them a bit more effectively.

For my part, I only interact with this condition online…but many of my colleagues deal with this condition in person. My advice-which is to seek a dermatologist-has always been and will always be the same. However, I do feel like I need to give this advice a little bit differently from now on.

I would like to thank the dermatologists I reached out to for providing the literature cited here, as well as Hannah Davis for her assistance getting some of this literature.

5 Responses to Interacting With Ekbom’s sufferers: Guidelines from the dermatology literature.