How much water can ants drink?

Your Name: charles
Your Bug Question: How much can an ant drink of water?

I thought this question about how ants drink was really cool. It’s a question that has a pretty simple answer at first, but it also gets a lot more complicated when you delve into the details of how insects uptake fluid.

Ants, which are social wasps in the family Formicidae, are an insanely diverse family of insects. There’s over 12,000 species of ants currently described, and there could be as many as 20,000. To give you an idea of how this compares to mammals, there’s only about 40 species of dog living today.

So there’s a lot of ants, which have many different lifestyles. However, there’s only so many ways to collect fluid…and different tactics mean that they each drink a certain amount.

First, though, we need to explore how insect mouths work because drinking is a really complicated process for insects.

How do insects drink?

Like people, insects use their mouths to drink. They can do so in some pretty different ways, but they use the same piece of equipment to do this.

What parts do insects use to drink? 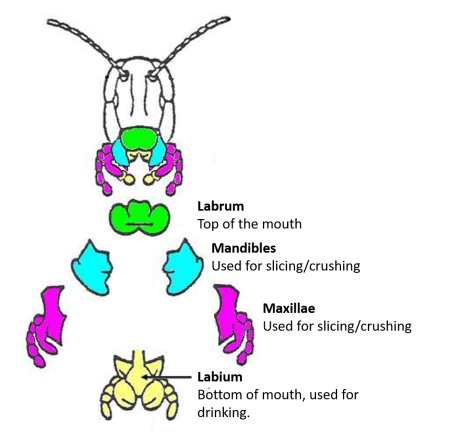 When we talk how insects drink, we’re talking about how they use one very specific part of their mouths. Insects have a lot of different moving parts in their mouths, and each part has some fairly specific functions. To make matters more complicated, most groups have evolved some very significant modifications of this design.

The mouthparts of ants in particular, are relatively unmodified and are pretty close to the mouthparts of the grasshopper to the left. Their mouths contain a labrum, which is used to hold food in the mouth while it’s being processed. Ants use the mandibles to grasp food, and the maxillae to process solid food. The labium is used to hold food in the bottom of the mouth while it’s eating. 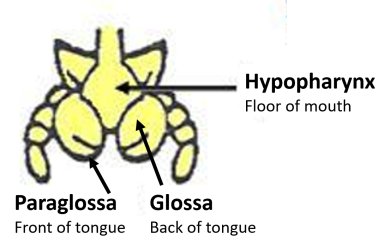 Ant labium, modified from image above by Joe Ballenger

The ant uses the labium for drinking, and it’s basically the ant equivalent of the human tongue. The labium is subdivided into several other parts. The hypopharynx is used to hold the liquid, while the glossa transports the liquid.

It should be noted that the grasshopper labium is a little different than the ant labium, but I couldn’t find any great pictures of the ant labium which showed the modification.

How do ants drink?

Licking is accomplished much like a dog lapping up water. The glossa is used to transport water into the hypopharynx in a physical manner. Yellowjackets use this method to drink water:

Sucking is accomplished in a way similar to how humans do it. Negative pressure is used to draw liquid into the hypopharynx, where it’s passed into the digestive system.

So how much can ants drink?

Camponotus rufipes carrying droplet of water. These ants also suck from the water drop, and can also carry droplets of water back to the nest. Image credit: Paul & Roces 2003

So this answer is a bit complicated.

Paul & Roces 2003 measured fluid intake in a bunch of different ant species, but they didn’t look at volume. They only calculated rates, and only gave a range of times the ants drank. However, this data still allows us to get a pretty good range for how much ants drink.

Based on this information, it seems the largest amount that an ant could drink is about 35 microliters. The smallest amount they generally choose to drink is .1 microliter. The typical ant probably drinks about 6-8 microliters of water in a single sitting.

One of the major issues with the scientific literature is that it’s written by scientists, for scientists. Consequently, papers tend to use units which don’t mean a whole lot to most folks. To understand how much volume we’re talking about above, you need to know what a microliter is.

How much water a microliter contains is very difficult to imagine, because this is a vanishingly small volume. A one-liter pop bottle contains exactly one million (1,000,000) microliters of soda. One way to put this is that it would take about 200,000 ants to drain a one liter bottle of soda if we’re using data for Camponotus mus.

One drop of water is roughly 30 microliters. It’s an imprecise measurement, to be fair, but it works well for a visual gauge of liquid volume. Picture credit: Joe Ballenger

I think there’s a more accessible unit we can use to compare, though. We can compare these numbers to a drop of water.

While in graduate school, I needed to be able to quickly measure small amounts of buffer. To do this, I measured how much water was in a single drop exuded from a plastic eyedropper. Water drops off the pipetter at about 33 microliters of water, so one drop of water is about 33 microliters.

Ants are small, but they can drink a lot of water depending on their body weight. Your typical ant, in an average setting, probably drinks about 7 microliters of water. This is equivalent to 1/5th of a drop of water.

It should be noted that this might not necessarily reflect how much water an ant can bring back to the nest. Many ants, particularly those which can’t store water in their stomach, actually carry droplets of water back to the nest. These drops can be significantly larger than what’s discussed here

On the plus side, if you’re worried about ants stealing your entire bottle soda…there’s no reason to worry because you’ve got enough to share with your six-legged friends.

Unless, of course, there’s a quarter million ants heading your way. Then you’ve got some major problems.

Thanks to Biker Lee and Sébastien de Valeriola for helping us acquire some of the literature used for this post.

This entry was posted in Behavior, Ecology, Physiology and tagged ants, Drinking, Mouthparts. Bookmark the permalink.

2 Responses to How much water can ants drink?