Why do some insects pee sugar?

So let’s unpack this one, because insect pee (watery poop, actually) is really interesting in every way. Here’s a video of what Anastasia was talking about:

If you want to see more insects doing this, look for Insect Honeydew on YouTube. 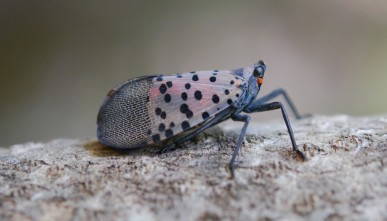 One of the keys to their diversity is their feeding style, the Hemipterans all make a living by liquefying their food. Living on a liquid diet seems simple at first, but these guys can do anything the ‘chewers’ can do. There’s predators, parasites, herbivores, and each of these guys can eat any part of their hosts. In fact, it’s really hard to figure out what these guys eat because they eat so precisely.

Spotted lanternflies, a newly introduced species, feed on a plant liquid called phloem. Phloem is a sugar-rich liquid used by plants to transport nutrients. Lanternflies, and other insects like aphids, tap into plant veins.and suck out the sugary liquid inside. This liquid is passed out as a watery sugar-rich substance called honeydew.

So why do some insects poop sugar?

To answer this question, we’re going to have to talk about another group of insects: aphids.

Aphids are kind of a model system for phloem-feeding insects. The reason for this isn’t because they’re easier to study than the spotted lanternfly, it’s because they’re more economically important. Simply put, from a historical perspective, there’s just been more of an incentive to control them. Because we want to control their populations in farms, we want to know how they work. A lot of the basics are the same, although there may be a lot of undiscovered differences between aphids and lanternflies that are really important.

Why does phloem make watery poop?

Plants don’t have blood, but they do have a circulatory system. The top of the plant produces sugars, which get passed down to the roots. The bottom of the plant stores these sugars, and water goes back up to the top of the plant as xylem. It’s a bit more complicated than that, as Hank from SciShow explains.

Phloem is really important for the transport of the main molecule plants make from light, sucrose. Sucrose, a kind of sugar, is the main component of phloem…but there are other components. Some are sugars linked together. Amino acids (proteins are made of these), proteins, bits of DNA, all of these are in phloem. The exact components of phloem are different depending on the plant…but it’s a really complicated liquid which is made mostly of sugar.

Why is Lanternfly poop watery? 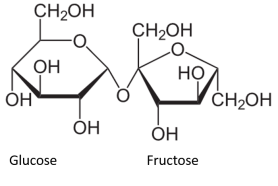 Sucrose, or table sugar, is the main type of sugar found in phloem. Sucrose is made of two other kinds of sugar: Glucose and Fructose. Image Credit: NEUROtiker, via Wikipedia. License info: Public Domain.

Phloem isn’t exactly a great source of nutrients, because it has a lot of sugars and not a lot of other building blocks. It’s basically candy.

So eating phloem has a lot of challenges, and one of the biggest is that these insects eat a lot more sugar than they can handle. Water gets pulled into areas with a really high concentration of sugar, and the the aphid gut contains mostly sugar. Because of this tendency for water to get pulled into areas with high sugar concentrations, the high sugar diet of the aphid (and lanterflies, too) means it should shrivel up like an adorable little raisin.

Aphids and other phloem feeding insects need a way to lower the concentration of sugars in their waste after the insect takes what it needs. The easiest way to do this is to convert lots of small sugars to a handful of big sugar molecules by linking them together. This makes it so the poop neither pulls water into or out of the insect…it’s isotonic.

So what you end up with is poop that’s both watery, and sugar rich. The insect eats a large amount of liquid, more than it needs, and it would cost the insect a lot of energy to take all of that water out of the poop. Evolution is pretty economical, and this is the cheapest way to get rid of waste sugar in terms of energy.

The poop of aphids, and other phloem feeders, is a special substance called honeydew. It’s really important for a number of reasons.

First, the bug poop is actually kind of harmful to plants. The sugars themselves are harmless, but they allow fungus to grow on the leaf. Actually, the fungus itself is also pretty harmless. It doesn’t infect the plant, it just kind of grows all over the leaves.

It turns out that this is pretty harmful to the plant, because the fungus grows on the top of the leaves. By growing on the upper surface of the leaf, sooty mildew blocks out the light the plant needs to make nutrients. Even though this is an indirect interaction, it’s one that’s really important.

There’s another interesting thing honeydew does, however: it protects the insect. It also serves as a source of nutrients for other sugar loving insects.

One of the difficult parts of answering this question was finding a video of insects making honeydew without another insect being involved.

For example, here’s a honeybee collecting honeydew that’s been made by insects in a tree:

More often, however, the insect in the picture is an ant. Like in this video:

Well, except the plants.

The spotted lanternfly is a new pest that reaches really high numbers, and these populations suck plants dry. Its range is still restricted to Pennsylvania, but if it starts to spread it could cause a lot of problems for fruit tree growers.

The insect does exactly what Anastasia says…it sucks liquid out of plants and pees copiously to pass out sugars and water that aren’t needed. This liquid, called honeydew, can go on to grow fungus on leaves that further affects the ability of the plants to produce the things we eat.

Their diet is really unusual, even among insects, because they’ve had to get around pulling in too many nutrients…and they’ve solved this problem by linking sugars together and passing them right back out.

This system has other advantages as well, because it allows these insects to recruit other bugs to protect them.

This entry was posted in Physiology and tagged pee, sugar. Bookmark the permalink.

3 Responses to Why do some insects pee sugar?