What have we learned about science communication over the past year of answering your questions?

Posted on December 7, 2015 by Polistes fuscatus

We recently got back from the Entomological Society of America’s annual meeting, where we were invited to give a talk about Ask an Entomologist.

We’re both young professionals, so this is a big opportunity for us for a lot of reasons. One of the big things is that we get to talk shop with other science communicators, and do something that will help schools create outreach programs. Nancy discussed what we do at meetings in We’re on an Adventure! ESA 2015, and we had a great time.

We’re a pretty unique project because we’re a blog that’s driven by our audience. We are a ‘safe place’ where people can ask any sorts of questions about insects they want, and that’s not only important to us…but also to the future of science. We specialize in dealing with things people outside the scientific community are interested in. This also gives us a pretty unique opportunity to look for patterns in the sorts of questions that people ask. People learn about biology from this blog, but we also learn about the sorts of things people are interested in.

During our first year, we’ve actually noticed a lot of interesting patterns which could help new science communicators know what to expect.

So…what have we learned? We tabulated our data from our very first post to the end of October, so we’re about to discuss roughly 10 months of data. Some of this stuff was left out of the ESA talk due to time…so if you went to that (*THANK YOU!*), there will be some new stuff here.

It’s important to note that Joe’s been blogging for a very long time. He started blogging in 2007, and has participated in both solo projects and group projects. The patterns we see in this blog are similar enough to the patterns Joe has seen in his other projects. We expect many of these patterns to apply to newer projects. 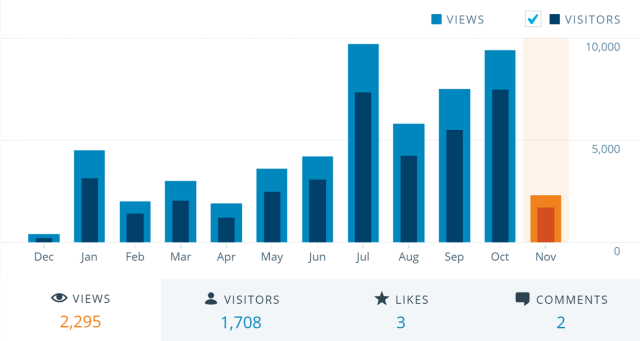 Ask an Entomologist is actually a fairly small project, although we are growing pretty quickly. The data for November is current as of Nov. 15.

Do not plan on making it big with your first post. Or your second. Or your third. Also, don’t buy ads. And the ad thing doesn’t come from just us.

This project is actually kind of small compared to other stuff we’ve done. Our blog gets about 150-200 unique visitors per day. For comparison, Joe wrote for the blog Biology Fortified while he was in graduate school, and that blog averages 700-1,500 views per day.

Our audience grew quite slowly, and mostly through word of mouth. We did experiment with buying ads on Facebook, but the majority of our views came as people read and shared our posts. We saw some big peaks when we had unusually successful posts, followed by steady growth.

Readership shrank when we didn’t publish regularly during November, due to our conference preparation. In order to keep growing, you need to keep posting on a somewhat regular basis. Know what days your readers hit up your blog, and post around then. Stability is key, and it’s something we need to work on.

Expect some variation in your readership; each project Joe has been involved with went through regular expansions and contractions. Blogs are almost like a living being; they grow and shrink with the environment.

The blogosphere is not and should not be a competitive place.

The Questions People Ask Don’t Necessarily Reflect What Gets Read

Most people ask us to ID bugs or about infestations. There are websites like The Entomology Group and BugGuide.net which are run by people who ID bugs for a living, so we try not to compete with them. We also can’t really deal with infestation questions…but we are working to compile some resources. Instead, our niche is writing about biology rather than ID or management. 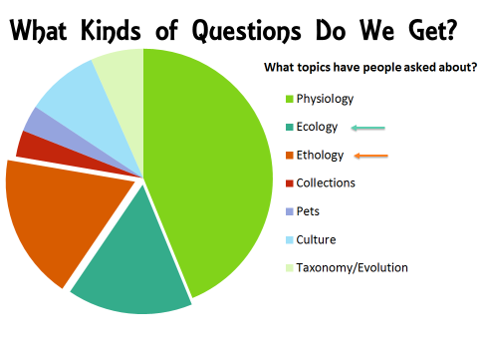 ID requests and questions about infestations are our most common inquiries, but we didn’t include them here. In terms of biology most people are interested in how insects function, how they behave, and how they live in the wild.

In terms of what people ask about, we get the majority of the questions are  about how insects work. Tied for second are questions about ecology and behavior. In terms of which insects people ask about, they tend to ask about the insects they notice. Almost every question we get mentions that the person actually observed or encountered the insect they’re asking about, and many which don’t mention this are asking about common insects we expect people encountered at some point. The most commonly asked about insects are about bees and wasps. 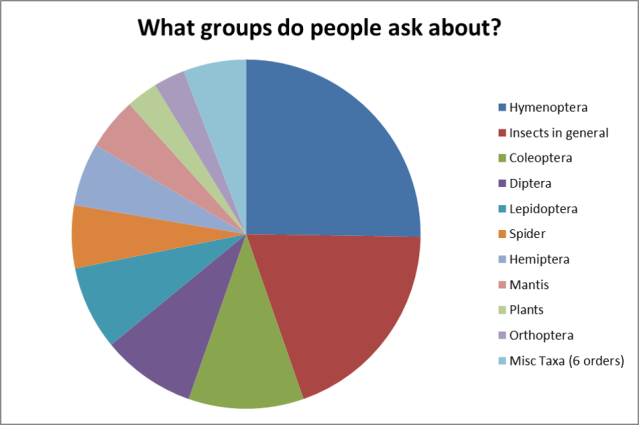 This is a slide we cut from the presentation due to a lack of time. We feel like this slide is important because it shows that people are aware of a surprisingly huge amount of insect diversity. Infestation and ID requests were not counted in this total.

However, the posts which get read are very different. A lot of the posts that get shared tend to be about things like scientific culture, or which teach people how to do things. There are also a lot of posts, like Nancy’s post about insects taking shelter in rainstorms, which allow people to make emotional connections to insects…those are big.

This is something we didn’t mention during our talk, mostly because we didn’t make the connection until we got home from ESA. Scientific conferences are where scientists talk about their research, and research is always based on a question the researcher has. While going to these seminars, we were thinking about our blog and the questions we received over the past year.

The talks we attended revolved around researchers asking the same questions our audience asks. The questions the researchers ask are more intricate and complicated, but you see the same basic curiosities between scientists and the public. If you think about it, this shouldn’t be surprising, because we’re all just people and the world around us is amazing.

One thing that we like to do is unlock scientific literature. Many scientific articles are not only sealed behind paywall, but the vocabulary alone makes them inaccessible to most people. Even some scientists in other biological fields can’t get though some of the literature. By unlocking the literature, we can not only answer people’s questions, but also show you that you ask the same questions as researchers! And that’s pretty cool.

This project requires a lot of organization and work behind the scenes, far more than your standard science blog. However, we’ve learned a lot about how to address the public, organize, manage social media…and we’ve gotten the chance to connect with you on a personal level.

Thanks Kylee G for putting our philosophy into words.

“Win the relationship, not the argument.” #sciencecommunication #entsoc2015

We still have a long ways to go, however. There are a lot of resources, like infestation hotlines, which need to be better advertised. We’re not sure if the need has been known before now, but it’s a pattern that we’ve noticed in our messages…and something we’d like to do something about.

It’s been the hardest project we’ve ever undertaken, but it’s also been the most rewarding.

Thank *YOU* for allowing us to open our world to you. Thank you for being curious and noticing the little world beneath your feet.  We’ve been able to teach you guys a lot about bugs, and you’ve been able to teach us about bugs too! We don’t know all the answers to the questions you throw out at us, and we get to explore beyond our expertise.

You’ve also helped us understand what goes into effective outreach. We’ve had  opportunity to pass this knowledge along to our colleagues, and we think that’s the most important part. This project allows the public and scientists to interact with one another,  learn from one another, and build the relationship that’s always supposed to have been there.

We plan on doing this analysis once per year and comparing different years. Reflection is really important to this process. We think that the types of posts which get shared won’t change a whole lot, but we also expect the interests of the public to shift for a variety of reasons. But maybe we’ll be in for a bunch of surprises!

However, to track these trends we need to get more data. So keep watching the bugs in your backyard, and keep sending us your questions! And thanks again for always keeping us on our toes!

Hello, I'm the friendly admin for the Ask an Entomologist blog
View all posts by Polistes fuscatus →
This entry was posted in Education, Research and tagged Conference, email, facebook, SciComm, science communication, twitter. Bookmark the permalink.