Why don’t spiders have wings?

Your Name: Anarely
Your Bug Question: Hello,
I was wondering, why are the exact reasons that spiders don’t have wings? Is it possible for them to evolve and get them or what is stopping this from happening?

I’m sure the very thought of winged spiders would send some corners of the internet into fits of terror, but if you think about it…spiders really should have wings.

The vast majority of insects have wings, even if they’ve lost them along the evolutionary way. Insects use wings for things like finding new food sources, fleeing from predators, finding mates, and dispersing to new areas. These are things spiders do, as well.

Not only do spiders have a need to do things like disperse to new areas, and find new food sources in times of need, many spiders do this by taking to the air in a process called ballooning. They extrude silk out of their abdomens, and use it kind of like a kite to bring them somewhere else.

However, the major disadvantage of ballooning is the relative lack of control over where you end up. You’re pretty much at the mercy of the elements, and can’t really control where you eventually land.

Another area where wings could help is the direction of falls. Some flies and damselflies hover to steal spiders out of their webs…but Portia uses a dragline to ambush her prey.

Some spiders need to spin webs across huge chasms, and again, silk comes in really handy here. They let out a really big line of silk, which attaches somewhere random, and then crawl across that line to reinforce it and spin their webs.

So even though spiders take care of some of their needs through flight, they have a really inefficient way to do it. They could really use wings, but don’t have wings.

So why don’t spiders have wings?

To answer this question, first we need to understand why insects have wings. Then we can talk about why spiders don’t have wings.

How did wings evolve in bugs?

There are two main hypothesis about the evolution of flight in insects, each with stuff that makes sense about it and stuff that doesn’t make sense.

The first idea for the origin of insect flight comes from these big lobes that some insects have sticking out of their sides. These are called ‘paranotal lobes’, and are labeled ‘pnl’ in the image below. 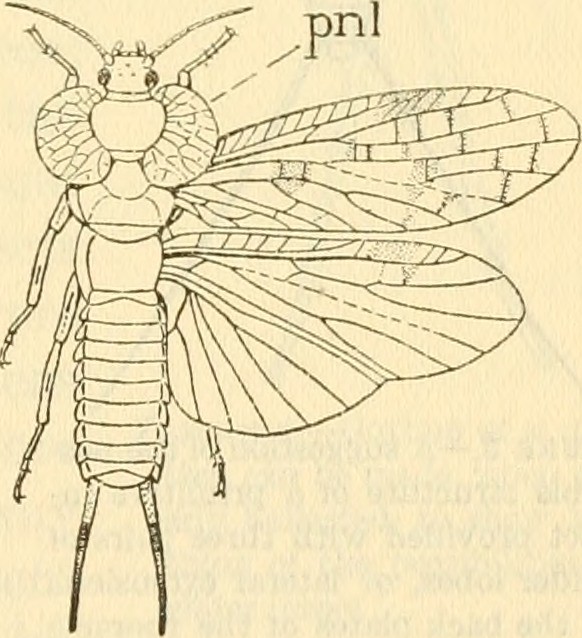 The Palaeodictyoptera have the most pronounced paranotal lobes of the insects. In fact, early insect paleontologists thought these lobes were wings in this specific group. You can even see some early works referring to ‘six-winged’ insects, undoubtedly a reference to this now extinct insect order.

In reality, the things that stick out from the sides of their bodies that resemble wings are now thought to help the larger insects control their temperature more easily. In some species which exist today, they can even be used to steer insects while falling.

So you’ve got these paranotal lobes, which stick out of the insect. They look like wings, and help the insect glide in some cases. The problem with this, however, is that they don’t have any musculature or articulations which allow them to flap. They’re just kind of…there…and can’t move.

So the ecology matches well with this theory, but the physiology isn’t a slam-dunk.

Which brings us to…

Take a look at the video above. See those things on the side of the body, flapping almost like insect wings?

Those are gills, which are used to extract oxygen from the water. They’ve got a venation structure similar to insect wings, and even move kind of like them. The genes which make wings and the genes which make gills even have common counterparts, so the genetic structure’s there.

Furthermore, there are many aquatic insects which skim along the water’s surface, which could have provided the intermediate behavior in the evolution of flight.

However, there are some issues with this particular theory as well. First, things like mayflies and dragonflies don’t behave like the beetle in the video above. They’ve got big bodies, and broad wings…which doesn’t work well for this type of behavior. You don’t really see skimming except in the more highly derived insects like Plecoptera, which are in an entirely different group of insects.

Second, aquatic insects have a whole host of different types of gills which all move in different ways. Dragonfly gills look entirely different than those of mayflies, and many authors believe that this indicates these insects invaded freshwater habitats separately. Mayflies and dragonflies are both thought to have terrestrial ancestors. In fact the most primitive members of the insects, things like Jumping Bristletails and Silverfish, are landlubbers.

So the gill physiology matches, but the ecology doesn’t seem to match.

So what about spiders?

There are two competing theories about how insect flight evolved, each with stuff that makes sense and stuff which doesn’t add up. The paranotal lobe theory is the one that’s most strongly considered, but the gill theory also has some strong evidence behind it. Since we’re talking about spiders, which don’t have gills, it’s probably better to focus on the paranotal lobe theory.

It’s generally thought that insect flight started in the trees as directed gliding, and that there was a selection pressure for longer glides which became better controlled as time went on. These longer glides were facilitated by the evolution of ‘flapping machinery’, which gave rise to wings.

So directed falling is really important to the evolution of flight, and we really need to explore things like…

As mentioned earlier, spiders have a definite need for wings. There are also behaviors in spiders which resemble flight. Specifically, some spiders have directed gliding.

The researchers who made this video also tested the other arachnids which lived in the same habitat for their ability to glide…and found that only Selenops had this ability. These spiders accomplished this by turning their entire body into an airfoil, and using their legs to guide their trajectory.

It looks like this behavior isn’t a characteristic of all spiders. It appears to have evolved once, in a very specific group of tree-dwelling spiders who don’t build webs.

What about guided falls and ballooning?

Silk in spiders seems to take care of a lot of stuff that flight takes care of in insects. Through ballooning, silk facilitates long-distance transport. By being able to create a dragline, they can direct their falls. Directing falls is thought to be one way that insect flight could have originally evolved, and ballooning is the most obvious parallel to flight in spiders. Although these aren’t the first behaviors which come to mind when discussing flight, it kind of makes sense to look at how the evolution of these behaviors influenced the diversification of spiders.

There are a couple of spider lineages which create draglines and balloon, however this doesn’t seem to have any real effect on their diversity. These behaviors appear in a couple families of Mygalamorph spiders which aren’t very closely related to Araneomorphs. It doesn’t look like this ability really did anything for the diversity of spiders, at least not to the extent that flight helped diversify insects.

In the primitive spider groups which are able to make draglines, this is more of an evolutionary novelty because they’re extremely rare. They’re common in the Araneomorphs, but these guys have a much more obvious driver for their diversity…the ability to make webs that snatch prey out of the air.

Honestly, I’m not entirely sure.

Spiders are specialist predators of insects, and web-building was the main driver for their diversity. So spiders dominated a particular niche early on, and diversified along with their insect prey. Wings, hypothetically, could have been useful in this role.

I think it’s very likely that these two differences in lifestyles, the use of silk and the gliding behavior, between tree-dwelling spiders and tree-dwelling insects had some influence in why spiders never evolved flight. There may also be other reasons, ecological, behavioral, and physiological, I haven’t considered in this post.

5 Responses to Why don’t spiders have wings?