@BugQuestions I heard male bees don’t have stingers. Is that true of all bees or just some species?

This question came to us over Twitter, and given my recent post about bee genetics I thought it was worth a discussion because it allows us to further explore the evolution of bees, wasps and ants. This question can be answered pretty well in less than 140 characters, but I feel like that answer leaves out a lot of interesting stuff.

@krbower Great question! The stinger is a modified egg laying device, so only girls have them. Some males have defensive spikes on (1/2) — Ask An Entomologist (@BugQuestions) September 9, 2015

@krbower their butts, which allow them to spine anyone who grabs them. They don’t have venom, though…and they’re not real stingers. (2/2)

The short answer is this: Early in the bee/wasp evolutionary history, female wasps needed to lay their eggs inside stuff. This required pretty extensive modification of certain structures, and males had no need for this because they don’t lay eggs. Since evolution is usually pretty economical, development tends not to waste energy on large and unwieldy structures which aren’t needed.

So let’s explore how different groups of wasps use their venom, and how male wasps defend themselves without this very important weapon.

The ovipositor, also known as the stinger in stinging wasps, is pretty female-centric. Early in the evolution of the wasps, it was used as an apparatus for females to lay eggs into plants. In parasitoids, it was used to inject venom and eggs into a host. In species which evolved a social lifestyle, this system got co-opted for defense.

There have been changes in the shape of the stinger which have facilitated this change in function. Most sawflies have a flat saw-shaped stinger which is great for slicing into things, but not so great at stabbing things. The stingers of the stinging insects most people are familiar with are more rounded, and act like a needle.

Venom and the evolution of the sting 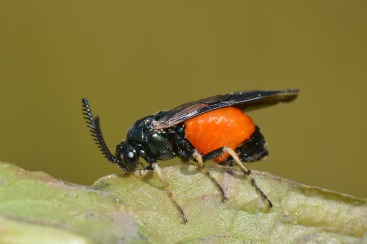 Pergid sawfly demonstrating how ovipositor is used in the most primitive wasps. The ovipositor can just barely be seen in this picture, to the right of where black meets red on the wasp’s butt. The ovipositors of this, and many other wasp species, flips down when in use. When not in use, it’s covered by a sheath.
Picture credit: Jean and Fred via Flikr
License info: CC-BY-NC-2.0

Their ovipositors are very good at tunneling into wood, but aren’t much good for defense. Sawflies simply can’t sting very well, but some species might use them to poke attackers.

Although sawflies eat plants, they do have a venom of sorts…and their relationship with venom is really complicated because sawflies are their own highly derived organisms. Calling something ‘primitive’ only means that it slightly resembles an ancestral state, and it’s really easy to forget that these organisms continually evolve as well. Sawflies are actually a textbook example of this.

The venom (and general biology) of a lot of sawflies isn’t very well known but the biology of one forest pest in particular, Sirex noctilio, has been investigated pretty well. These guys gang up on trees, lay a whole bunch of eggs, and kill the trees with a one-two punch involving both venom and a symbiotic fungus which lives inside the wasp’s body. The venom and fungus are both injected during the egg laying process, and act together to weaken the tree’s defenses. The larva feeds on the fungus which sickens the tree. The active component of Sirex venom was only described last year so it’s not very clear how this animal’s venom works or how similar it is to other wasp venoms.

So even the most primitive wasps have some sort of venom, even if they don’t use it for defense against predators.

Wasp evolution gets kind of confusing due to a lot of lifestyle changes, but the role of the ovipositor stays pretty much constant throughout. It’s used to inject stuff, whether it’s eggs or venom, into things. Injecting eggs and venom into a host, and venom into a predator aren’t entirely different tasks.

The role of venom, however, changes considerably between different wasp groups. The parasitic Braconid wasp Asobara uses it to knock out the immune system of its host, while the predatory wasp Ampulex compressa uses it’s stinger to perform a very extreme version of host modification.

Ampulex is a really important wasp, because it’s a member of a group called the ‘Apoid‘ wasps which are very closely related to bees. In these solitary hunting wasps, the females use their stings for two things: defense against predators and host modification. Crabronid wasps, like the Cicada Killer we discussed last week, also have dual-purpose venom. Their sting is very painful to predators, but it also helps them capture food for their larvae by paralyzing their hosts. Crabronid wasps and bees are very closely related.

Bees are at the end of this gradation and most species use their venom entirely for defense, because they’re not parasites. In the workers of social species the ovaries are usually nonfunctional, and the venom gland is what gets the most use. Outside of the queens, honeybees and social wasps pretty much only use their stingers for defense.

The machinery which was the most convenient for them to use was one which already existed. The egg laying device which once allowed them to control their hosts became a device which allowed them to defend themselves. So the evolution of the stinger and venom go hand-in-hand when it comes to defense.

So…how do male wasps defend themselves? 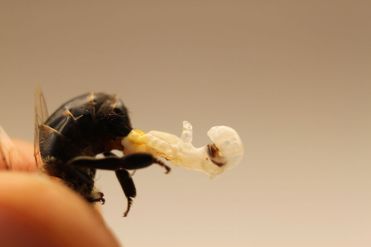 Penis of a male honeybee. Bee penises are pretty fragile, and the penis of the male honeybee explodes with a really loud pop during the mating process. This single ejaculation kills the bee.
So it’s just not very well suited to defense.
Picture credit: Michael L Smith, via Wikimedia Commons.
License info: Creative Commons Attribution-Share Alike 3.0

Female wasps have a rather exquisite ovipositor that’s beautifully adapted for injecting stuff into things…whether it’s eggs or venom. The male penis just doesn’t serve that role very well, due to it’s shape and relative fragility. Since males aren’t the ones putting eggs into stuff, they never needed the base machinery which was modified for defense in the females.

That’s not to say that males are completely helpless, though. In many species, males and females are similarly colored…so they’re protected because they look close enough to the girls to gain protection from their reputation. Other than that, most male wasps are actually pretty helpless. They’ll pretend to sting in many cases, and sometimes let out a squeak that’s more adorable than intimidating, but they aren’t able to to inject venom because of a lack of both ovipositors and venom glands.

If you can identify Polistes males, which are out at this time of year, you can handle them all you want without ever getting hurt.

A lot of male wasps are helpless, but not all of them. Some do have pointy spikes on their butts, just above their penises. These spikes allow them to poke attackers, and surprise them with a pinprick. The defining character of male Scoliid wasps, for example, is a trident which he wears on his butt to stab his enemies. This is called a ‘pseudostinger’, and it’s pretty much harmless because it doesn’t inject venom.

Male Thynnid wasps have a rather intimidating pseudostinger which sticks out from below the penis. Again, this might give you a sharp prick…but it can’t inject any venom.

Wasps have an incredibly interesting evolutionary history. The female wasps evolved an ovipositor which was used to lay eggs into plants. The ancestors of today’s wasps were thought to be plant-feeders, which shifted into parasitism. These parasitoids found an entirely new use for this machinery in host modification. In groups which shifted to a more provisioning/predatory lifestyle, the ovipositor became a multipurpose tool. In groups which shifted out of the parasitoid lifestyle, the ovipositor became more useful for defending the nest.

Because the ovipositor was used for egg laying, an activity males don’t take part in, it was only females which developed a stinger.

Male wasps are usually pretty defenseless, and most rely a lot on their resemblance to the dangerous females for protection. A handful have taken a couple pointers from the female wasp playbook and developed their own pointy defense mechanisms. However, they can’t inject venom because venom has been a bigger part of the female toolkit.

Even though this is a long post, it’s still kind of a short explanation. For example, there are complicated genetic reasons males don’t do a whole lot of colony work which includes colony defense. Overall, the most important reason male bees can’t sting is because the stinger and venom glands became fixed in the early body plan of female wasps and just never evolved in the male.

3 Responses to Why can’t male bees (or wasps) sting?