What makes a good model organism? How are models different from one another?

This question started out as a conversation with Enlightened Bugs on Twitter. They sent us a picture of a deformed wasp, and asked what could have caused her wings to appear like this:

There’s a couple things which could be going on here, whether it’s a virus infection, an injury or a genetic defect. I hypothesized that this wasp could have been infected with Deformed Wing Virus, a virus which normally attacks honeybees, but the deformities caused by this virus are quite different from what’s seen in the picture. Whether this virus can infect these wasps, and cause the same deformities seen in bees is also an open question because of a lack of information. So I don’t think this is a great hypothesis.

An injury or a genetic defect is more likely the cause, but it would be hard to demonstrate the latter because little is known about wing patterning in wasps compared to wing patterning in flies. Enlightened Bugs pointed out that a lot of the work on wings had been done in flies, and we both thought it would be a good idea to discuss how this sort of genetic research worked. So what makes a good model organism, and how do these models differ between one another?

Fruit fly culture. All you need is fruit, yeast, and something for them to pupate on.
This one was commercially prepared, and has a diet which is a trade secret. Diets for fruit flies are commonly available online, however.
Picture credit: Joe Ballenger

I suppose the first thing which should be mentioned when deciding on a model organism is that it needs to be simple to raise. Simply put, anybody should be able to raise the animal without much of a learning curve. This means that it needs to be tolerant of a wide range of conditions, eat stuff that you can buy almost anywhere, and have a lifecycle that’s not too crazy. The common fruit fly, Drosophila melanogaster, is basically the perfect model for a lot of these reasons. Right now, I’m rearing a closely related species by accident…they hitch-hiked into my house on some bananas and set up shop. So they can live anywhere there’s fruit, and don’t really need a whole lot of maintenance. 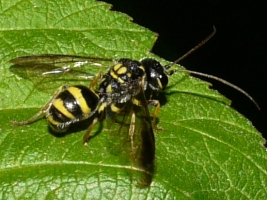 There are a lot of really interesting organisms which we could learn a lot from, but which haven’t been studied because their life cycles are kind of crazy. One example would be Trigonalid wasps which lay their eggs in leaves and need to be eaten by a caterpillar. This caterpillar needs to be parasitized by a wasp or a fly, or eaten by a predatory wasp and fed to it’s larvae…depending on the kind of Trigonalid. Such a life cycle would require a scientist to grow specific plants, and keep continuous cultures of multiple insects. So they’d be a great system to study, but extremely difficult to raise.

There’s also some models which break this rule, like honeybees. Honeybees live in large colonies, and need to eat a lot of different types of pollen to stay healthy. There are some artificial diets, and they can be raised indoors for short periods, but this approach makes them behave differently…which isn’t a good idea if you’re interested in their natural behaviors.

So why do we use honeybees as models?

So some great potential model insects, like periodical cicadas or Trigonalid wasps, go unused because they’re really hard to raise. There, however, are some models which are really hard to work with but still used.

So why do we use them?

One big reason is economic importance. Honeybees are a really important model because we depend on them for hundreds of millions of dollars in agricultural production. They’re really important pollinators, so it pays to know how they work so we can understand the causes of their current problems. In fact, a lot of models are chosen for this exact reason. Caterpillars are extremely difficult to perform certain genetic studies on, but a lot of really important crop pests are caterpillars so it pays to know how their systems work so we can toss our various wrenches into that machinery.

Which leads us to…

A Lot of Compatible Tools 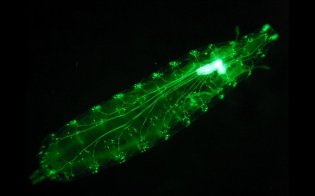 Fruit fly larva expressing a glowing jellyfish protein in its nervous system. Transgenesis is a really important tool in research, but not all bugs can be transformed as easily as fruit flies.
Picture credit: Balapagos, via Flikr
License info: CC-CY-SA 2.0

For better or worse, we’re living in the genomic age. This means that everybody is sequencing genomes, and that’s a first step for figuring out what’s going on with a lot of models. Having a sequenced genome is great, because it’s a parts list for all the stuff your bug has. Genomes are an extremely powerful tool, and have propelled science into an age that was completely unimaginable by Darwin himeslf.

However, genomes can only give us so much information. A lot of models are held back by a lack of compatible tools. Honeybees, for example, are problematic because they can’t be raised in a sterile environment. Pathogens are an extremely important part of understanding Colony Collapse Disorder, but there are no pathogen free bee colonies. Needless to say, this is a really big problem for bee research.

Gene silencing is a great example of a tool that can make or break a potential model system. Scientists can use a technique called RNAi to turn genes off in certain insects, and this allows us to narrow down the processes that gene could be involved with. It’s a new technique, but it’s already shown promise in almost every area of entomology from genetic research to applied pest control.

However, not all insects do RNAi. Caterpillars are an example of an insect which can’t use our most powerful tools, despite the fact they’re really important in agriculture. This puts a real damper on the sorts of experiments scientists can do, and scientists often have to do far more complicated experiments to do something which could be easily hammered out in fruit flies.

Similarly, there are tools which can’t be easily used in fruit flies. Caterpillars, for example, can easily produce enough blood to fill up a test tube. Fruit flies, on the other hand, produce barely enough blood to cover one of the periods on this screen. So while caterpillars can’t do genetics very well, they’re great for biochemical studies because they produce a lot of blood.

So how are models similar, and different, from one another?

Using wing formation as our example, there are a lot of processes identical between flies and wasps. Wings in flies and wasps are more or less the same structures; those wings messed up in the wasp picture are made from the same stuff as the main wings of the fruit fly. A biologist would tell you the structures are homologous; they’re made from structures which have been passed from ancestors to decedents. In theory, all the bits and pieces involved in wing crinkling should be similar enough to make pretty good comparisons.

So the mutations which mess up fruit fly wings would also probably mess up wasp wings in a similar way. However, there are also some really important differences we need to take into account when studying these things. A really good example of differences is how boy and girl bugs are made, a subject Nancy touched on awhile back.

Both of these bugs are half boy and half girl, split down the middle. The bee on the left has a slightly different way of making different sexes than the phasmid on the left. So even though these bugs have the same problems, what’s going on beneath the surface may be very different.
Picture credit/License info:
Bee: Sam Droege/Public Domain
Phasmid: Acrocynus/CC-BY-SA 1.0

So each of these bugs have different ways of making boys and girls. If we wanted to understand why some bugs are part boy/part girl, split down the middle, the explanation would be a little bit different if you were looking at flies, bees, grasshoppers, or beetles. So it would be a lot harder to make comparisons between these split-sex insects, and bugs with wonky wings because these two systems are different.

That’s a lot of information to lay on you in two paragraphs, but the take home message is this: every model mentioned in this post, flies, bees, and beetles, has similarities and differences which are important in figuring out what’s going on in terms of biology.

My best guess for the wasp which started this conversation is an injury, but it’s difficult to say what happened for sure. It could have been a mutation which caused trouble emerging, or it could have been a mutation like Drosophila CYO or a defect in EGF signaling which makes the wings twist and crinkle at the ends. These aren’t the only-or even the best-possible guesses, but they’re mutations which somewhat resemble what we see in the picture. In short, I can guess what’s going on in this picture…but there’s no way for me to know without doubt.

A lot of mutations cause similar effects, and I’d have to replicate these studies in wasps to know for sure. So if someone wants to give me, or some of my friends, a couple million dollars…we might be able to hammer this out in a few years. Science is really expensive…but that’s another discussion.

2 Responses to What makes a good model organism? How are models different from one another?