The truth about GMO mosquitoes. 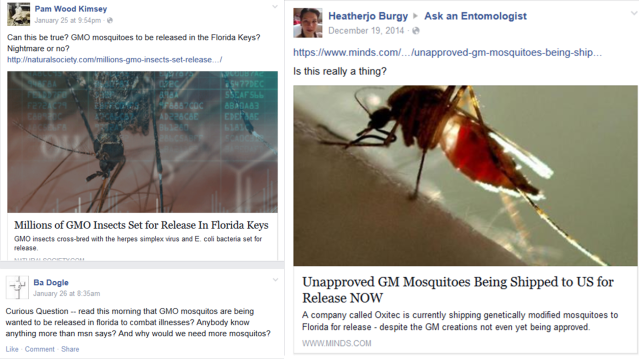 People are really curious about these mosquitoes…and we’re really excited to get the opportunity to talk about how new technology can improve lives!

People have asked Nancy and me a lot of questions about the sterile GMO mosquitoes the British company Oxitec is planning to release in Florida. We get these questions on a Facebook page we administrate as well as through this blog. People are really curious about what’s going on with these mosquitoes, and we’re really excited to talk about them!

It’s important to note that this release isn’t set in stone. The Florida Keys Mosquito Association has been pushing for these releases, but they can only happen if the FDA bestows their blessings upon the company to do this.

Who is being sterilized, and why?

Across the south, the most commonly encountered mosquitoes are potentially devastating disease vectors. The Yellow Fever Mosquito (YFM), Aedes aegypti, is a non-native species that was introduced with the arrival of European settlers. Aedes albopictus, the Asian Tiger Mosquito (ATM), was introduced in the 1990s. These mosquitoes are really common in urban and suburban areas where their food source…humans…are easily found. Unfortunately, they don’t belong here so nothing else even considers them to be food, leaving us with an explosive population. Besides rudely interrupting dinner parties, these mosquitoes vector a lot of nasty and debilitating diseases like Dengue and, as Lindsay Lohan can tell you, Chikungunya.

Mosquitoes, while they all kind of look the same, are really quite different. Just as you don’t see a cat mating with a dog, different species of mosquitoes cannot mate with each other. This is really great, because this means that the sterilization technique employed by Oxitec can only affect the Yellow Fever Mosquito (YFM) it’s intended to fight.

Because the Ae. aegypti (YFM) and Ae. albopictus (ATM) don’t belong here, there are no species which depend on this animal for food. They are also highly dangerous because they spread diseases which are highly debilitating and more or less incurable. This sterilization technique should be viewed as a good thing as it’s meant to replace frequent pesticide spraying in places where there are lots of people.

Instead, we get a lot of questions about this topic is because it’s highly controversial. We also see a lot of pushback, cynicism, and incredulous questioning because it’s a new technology people think is kind of scary. There’s also a lot of misinformation spread by special interest groups groups, and the media isn’t exactly helping the situation. In fact, the scientific journal Nature even published an article which implied the objective of vector control techniques was the elimination of all mosquitoes on their news site.

It would be very difficult to find every article, and correct every myth about these mosquitoes…but I’ll do what I can. I’ve tried it before, and it turns out to be too much to do in one article.

Instead, I’m going to focus on the main question here:

Why is a transgenic approach superior to the current ways used to control this mosquito?

I’ve been following this for years, and I’ve written a lot about this in the past. I’ve talked about the history of this technique, and how it’s been successfully used in agriculture. I’ve also talked a bit about how the genetic machinery of these mosquitoes work. If you’re curious about the history of this technique, or how it works I would refer you to either of those articles because they’re still relevant and give some important background information.

Have Sterile Insects Been Used for Mosquito Control Before?

I discussed this further in my writing for Biofortified, but this technique is a variation of something called the Sterile Insect Technique (SIT from here on out) and was developed about 50 years ago. It was originally developed to combat pests like the Screwworm, Mediterranean Fruit Fly, and the Tsetse. Normally the SIT works by bombarding insects with high doses of radiation, which shreds their genomes just enough to cause lethal mutations that are passed on to the next generation when the male fly mates. The female is tricked into ‘thinking’ she’s laying fertile eggs, but these eggs die and the next generation never develops. It’s been hailed as one of the greatest successes in pest control, and the inventors of the technique eventually won the World Food Prize.

Rachel Carson, one of the first people to speak out about the devastating effects of pesticides on the environment,  even spoke favorably about the SIT in her famous book Silent Spring: 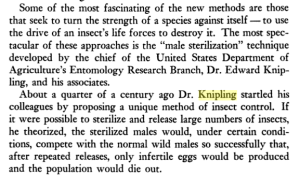 Rachel Carson was very much in favor of using the SIT because this has the potential to greatly reduce insecticide use…but more on that later.

The SIT has worked really well for a variety of pests which threaten farms, livestock and people. In the case of the MedFly, it’s even been used for purposes of national security…because it may have thwarted a bioterrorist attack. So we know the SIT works using radiation and there’s a long history of safe use, and a really long history of success.

So what’s the difference between the SIT and Oxtec’s Mosquitoes?

The Oxitec mosquitoes use DNA which that codes for a toxin which is deactivated by the antibiotic tetracycline, instead of using radiation. Tetracycline is used in medicine to treat bacterial infections, and isn’t common in the environment. This process is further described in detail in my Biofortified articles, and I won’t be getting into how this works here.

So why change a good, safe, reliable, and historically tested technique for transgenic insects for mosquito control?

Well, the big problem with irradiating mosquitoes is that it simply doesn’t work very well. There’s been a lot of basic research, and a lot of field trials testing irradiated mosquitoes for release into the wild. In case after case, the mosquitoes either die from the radiation treatment or just aren’t as ‘sexy’ as the irradiated males. Since the males just die, or can’t bring sexy back, the control fails. 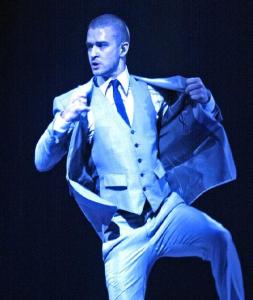 Why Not Just Use Insecticides? 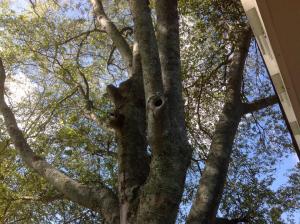 Picture of hard to reach mosquito breeding spots, courtesy of Sherry Thompson from the Garden Professor’s Blog on Facebook. There was a lot of great discussion about how some people can be a source of mosquitoes in the group…and the conversation is worth a read on it’s own.

Insecticides should always used as a last resort, after all other methods of control have failed. In agriculture there’s a lot of work that goes into deciding whether insecticidal treatment is a good idea in the first place, because farmers and scientists do care about your safety, regardless of what the media might have you think. There are some parallels with mosquito control.

Ecological controls, like destroying mosquito breeding grounds or applying parasites to mosquito breeding grounds, should always be used as a first line of defense. However, these often fail due to the biology of the pest. Aedes mosquitoes deposit their eggs in frequently flooded areas, and the eggs hatch as soon as they’re submerged. Any small pool of standing water works, whether it’s your neighbors birdbath, or a hole 30 feet off the ground in a tree. Often times these breeding grounds are impossible to find, or just can’t be reached.  Sometimes, people just don’t care about whether their yard is breeding mosquitoes. 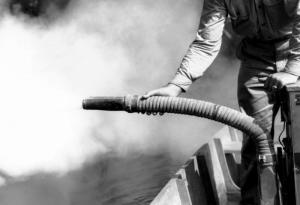 Oh, and the mosquitoes get resistant to insecticides…because insects evolve like everything else.

Vaccines are a wonderful tool for public health programs. They have improved the lives of people living in developing countries around the world, and were instrumental in eliminating smallpox. The fears about vaccines expressed by people living in wealthy and relatively disease free nations are completely unfounded. Vaccine safety has been upheld time and time again by every public health agency across the world as well as the medical community.

I want to get that out of the way first so I’m not misintrepreted when I say that vector control gives public health programs more bangs for their bucks than vaccines. Vaccines have been developed for some vector borne diseases, like Yellow Fever. These vaccines work, they work well, and they’ve saved lives. They’ve saved lots of lives.

The problem is that vaccines don’t exist for all diseases. The main disease the Oxitec mosquitoes combat is Dengue Fever. Dengue is caused by a virus that has one of four ‘serotypes’, which is kind of the viral equivalent of race. This disease can take one of two forms. The first form, Dengue Fever, is a very painful condition which results from infection by any one of four serotypes. If the same victim is infected by a second serotype, the immune system is sent into overdrive and causes a potentially fatal hemorrhagic fever known as Dengue Hemorrhagic Fever.

The involvement of the immune system means that the wrong vaccine could actually make things worse, and this challenge is difficult to overcome. There are also no good animal models for Dengue, so it’s very difficult to know exactly how this system works. Because of all these complicated factors, there is no vaccine for Dengue fever.

We, in the US, don’t have to get vaccinated for Yellow Fever because it doesn’t exist here. However, if you’re planning on visiting anywhere tropical, you should get vaccinated against this disease.

The article I linked in last week’s article, the Nature News piece about mosquito ecology, has given a lot of people the idea that the objective of vector control is the elimination of all mosquito species.

This impression, intentional nor not, isn’t the objective here…and this is from Oxitec itself.

The idea is to reduce the vector population to the point where disease transmission simply doesn’t happen, and this doesn’t mean completely eliminating vector species. It would be nice to eliminate Ae. aegypti (YFM) and Ae. albopictus (ATM) because they’re invasive, but it’s probably not going to happen.

There have been some limited field trials of this technique which have shown success, which are summarized on page 14 of this review. Caged trials have also occurred (see citations on page 15), so it’s not like the releases jumped straight to the field. The early results are promising, but it’s still too early to know if this technique will work.

Just because it’s a good idea doesn’t mean it will be effective…tests still need to be run to ensure success outside of the lab.

Nancy, my co-blogger, for her help editing the piece.

@Mem_Somerville for her help finding pictures of mosquito spraying, as well as alerting me to Rachel Carson’s writing.

5 Responses to The truth about GMO mosquitoes.