Since it’s summer, and bug season is in full swing, we get a lot of neat observations in our inbox. I wanted to highlight one such observation in this week’s post, because it involves one of my favorite bugs:

My name is Curt and I live in southeast Wisconsin. I saw these bees and thought it looked kinda odd. What exactly am I looking at? 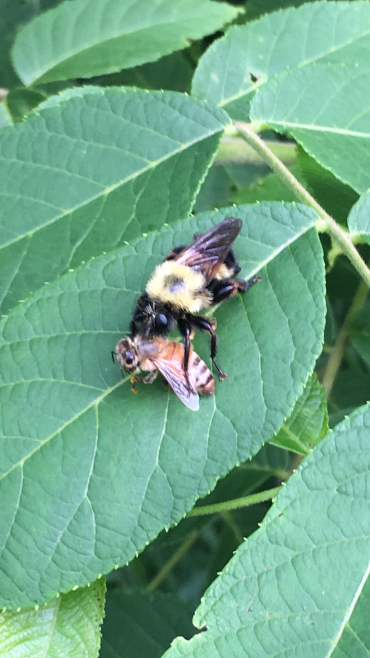 So let’s unmask this mystery!

The bug in the picture isn’t actually a bee. It’s a fly. Specifically, it’s a fly in the genus Laphria.

Laphria, also called the bee-like robber fly is a fly that’s well known for looking almost exactly like a bee. Even for bug scientists, it takes a really sharp eye to spot one out in the wild. If you know what to look for, however, it’s pretty easy to unmask.

Laphria is a fierce predator, and you can tell them apart from bees if you look really carefully. Its eyes take up much more of its head than the bee eyes, and its antennae are much smaller just like other flies. The eyes are an adaptation to predation, while the antennae are characteristic of the type that flies have.

As larvae, Laphria live in rotting wood. While inside the wood, they eat any other wood-feeding bugs that happen to be around. Many species of robber flies are really important predators of grubs that live underground, and I would think that Laphria has a similar lifecycle.

As adults, they actually feed a lot like assassin bugs. They’ll dart up to their prey, stab it with their mouths, and then liquefy their insides so they can suck out the milkshake-like substance.
This lifestyle is actually very effective. They won’t feed on anything bigger than they are, but robber flies can get big enough to take down bees, wasps, and even small dragonflies. They definitely use some sort of venom to take their prey down, but how that venom works is unknown…as far as I know.

This is a very cool picture of a really tiny apex predator, that has some cool life-history stuff going for it.

Hello, I'm the friendly admin for the Ask an Entomologist blog
View all posts by Polistes fuscatus →
This entry was posted in Identification, Taxonomy and tagged Flies. Bookmark the permalink.