How long have cicadas been around?

Your Name: Thomas
Your Bug Question: How long have cicadas been around (on earth).  Do we (you) know?

Cicadas have been around somewhere between 40 million and 200 million years. The earliest Cicadas are found in fossil beds from the Jurassic period. Of course, the answer kind of depends on how you want to define what a cicada is. The term ‘Cicada’ is a common name which is derived from a scientific name.

Cicadas are a part of their own superfamily, the Cicadoidea. This superfamily encompasses two living families: The Cicadas (Family Cicadidae) found worldwide, and the Hairy Cicadas (Family Tettigarctidae) from Australia. Although these insects look very different, they are actually very closely related. There’s also a bunch of extinct families.

The Cicadas most people are familiar with appear about 40 million years ago. The Australian Hairy Cicadas are much older, about 200 million years. I know that’s a lot of wiggle room, but this group of insects has an odd quirk of the fossil record that I think is kind of interesting.

For figuring out when this group of insects evolved, it’s the Tettigarctids which are important. In terms of their body plan, they lack some of the features that the Cicadas found everywhere else have. Specifically, they lack the equipment to make sounds humans can hear. They also have setae-hairs-sticking out all over their body.

In the fossil record, it’s actually kind of hard to tell exactly when the Cicadids split from the Tettigartids. These insects have very unique legs adapted for digging, and they’re difficult to mistake for anything else. So you can tell a Cicada just by the front pair of legs alone, and Cicada fossils are actually somewhat common. 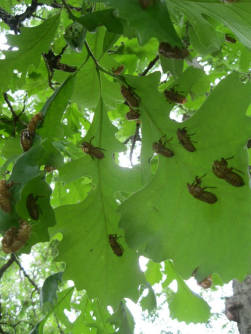 However, the reason Cicada fossils are common is what makes this difficult to answer. The final molts, or exoskeletons, of Cicadas are left behind when they turn into adults. They’re easy to crumble, but don’t decay very much. It’s just an exoskeleton, so they don’t make a good meal.

So this group of insects has left scientists with a lot of incomplete fossils which are hard to sort out. In other words, there’s bits and pieces of what look like Cicadas all over the fossil record…but these fossils are only fragments. The definitive fossils, the ones we can ID with certainty, are spread kind of far apart. Specifically, the two groups are spread about 140 million years apart.

So while the oldest Cicadid fossil-the ones that most of the world knows-is about 40 million years old, there are much older fossil legs which look suspiciously similar to those of modern Cicadid species. These could be as old as 100 million years.

Cicadas used to be a really diverse group of insects, but most lineages have gone extinct over the ages. We’re left with the Cicadas which lived with the dinosaurs, and one of the newer families which evolved much later. It’s possible that the dinosaurs we saw in the Jurassic Park movies heard the same sounds we hear on a summer day. It’s possible, but we don’t know for sure.

This entry was posted in Evolution and tagged Bug, cicada, Evolution, fossil, jurassic. Bookmark the permalink.

2 Responses to How long have cicadas been around?