The great thing about being on social media is that we run into a lot of questions and conversations that are very closely related to each other despite the fact that the participants might not realize it. Take this question…

…and this exchange in an unrelated thread… 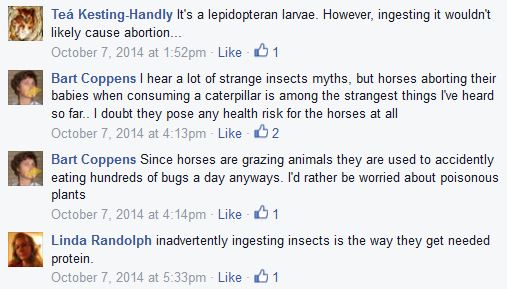 The Eastern Tent Caterpillar will be the subject of this post. It’s a very pretty caterpillar, but it has a bit of a dark side.
Picture credit: Andy Reago & Chrissy McClarren, via Flikr.
License info: CC-BY-2.0

…as a prime example. These posters are talking about the effects of caterpillar hairs on two different parts of the body. So, believe it or not, these questions are actually very closely related.

At first glance it would seem that this is a very odd combination of topics to cover in a single post, caterpillar defenses and spontaneous abortion in horses. How this happens, and why it happens, are directly related to how and why caterpillar hairs cause itchy reactions in people who carelessly handle them.

How do caterpillar hairs keep them from getting eaten? 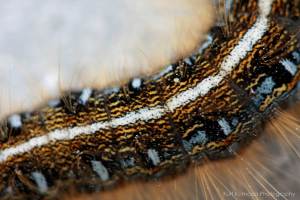 Closeup of an Eastern Tent Caterpillar, Malacosoma americanum showing bristles on the skin. The uriticating hairs are too small to be visible in this picture.
Image credit: Kurt Komoda, via Fliker. License info: CC-BY-NC-ND-2.0

Caterpillars, the larvae of butterflies and moths, are usually easy prey. They’re soft bodied, fairly large, and more or less defenseless in many cases. There are a lot of caterpillars which rely on being distasteful, or which rely on looking like something that’s kind of gross. We’ve discussed this before while talking about the osmeterium. Many caterpillars rely on not being seen to avoid being eaten.

A lot of caterpillars, however, take a more active role.

One very effective way to handle a predator is to be really difficult to eat. There are a lot of caterpillars which have hairs which are modified to inject poison, and these can be very dangerous. The genus Lonomia from South America is quite capable of killing a full grown human, and is considered to be very important from a medical standpoint. Most caterpillars aren’t as deadly, but there have been outbreaks large enough to cancel school in areas where some of the more venomous species occur.

Not all caterpillars which have hairs use them to inject venom. In many cases, these hairs can be irritating all on their own, and these hairs are called uriticating hairs. The purpose of these hairs is to irritate the skin of predators, particularly the more sensitive areas in the nose and mouth. In the US the most commonly encountered, and most medically significant, caterpillar which has uriticating hairs is the Eastern Tent Caterpillar. 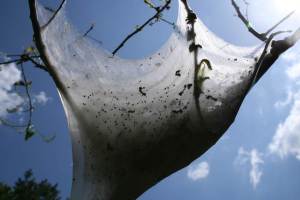 These hairs are an odd case because they don’t match how a lot of insect defenses are assumed to work. Venom, for instance, causes an immediate pain which gets the predator to associate the harmful insect with a distinct feeling of harm. Uriticating hairs have delayed effects, and often won’t cause problems until 12 hours or more after exposure. There’s a lot of differing ideas about why this would work, but the best guess seems to be that a lot of the species which have them are semi-social. They live in large, distinct nests which the predators would likely remember.

The purpose of uriticating hairs isn’t to inject venom, but to set off an allergic reaction in vertebrate hosts. These hairs are made of chitin, a component of insect exoskeletons which is also found in a lot of parasites. Our bodies are cued to detect and to respond to chitin and it’s degredation products. The hairs are essentially tiny chitin spears, which is perfect for causing this sort of reaction because they take advantage of a pre-existing sensitivity. There’s some evidence that proteins might enhance this effect in some species, but their relation to this process is not very well understood at this time.

How are these hairs related to miscarriages in horses?

Horses eat a lot of insects by accident. Most of the time, they’re harmless but there are a lot of insects which can harm horses when accidentally consumed. One example are the blister beetles, which produce a compound called cantharadin which can destroy the intestinal lining. Blister beetles tend to be found in alfalfa fields, and only a couple beetles can be lethal for a horse.

Sometimes, horses eat caterpillars which contain uriticating hairs by mistake. These hairs can poke through the intestinal wall, and let gut bacteria into the bloodstream. The bacteria don’t make the mother very sick, but they’ll eventually cross the placenta and take up residence in the fetus.

Caterpillar stings can be very uncomfortable, and should be treated as seriously as one would treat a bee or wasp sting. The Mayo Clinic has an excellent website on how to deal with these stings, and it’s a resource you should use should you come into contact with them.

This is also why some species of caterpillars need to be controlled around the house. While relatively few people own horses, these caterpillars can also cause a lot of harm to dogs and cats. The Pine Processionary Moth, found in Europe, has uriticating hairs which can cause a pretty severe injury to dogs which consume them.

Caterpillar hairs are itchy when they land in our skin because they hijack our immune systems to cause irritation. They can cause more severe conditions, including rotting of the tongue in dogs, when these hairs land in sensitive tissues. When they lodge into the intestine, they can allow bacteria into the bloodstream where they can cause problems in horses during certian stages of pregnancy.

So those little hairs can cause big problems, which I think is pretty crazy.